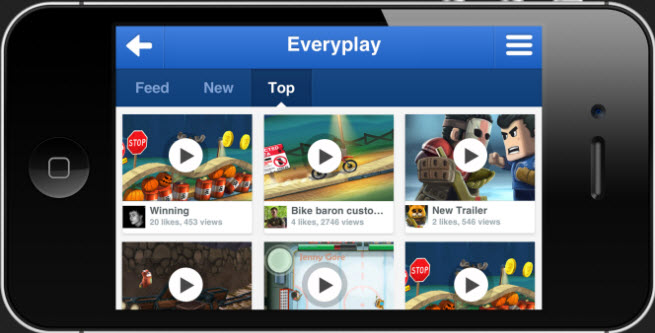 Applifier is launching a new social mobile gaming network today called Everyplay that lets you share videos of your best mobile game replays with your friends. Applifer’s intent is to boost the free discovery of mobile games at a time when the cost of advertising them is climbing. 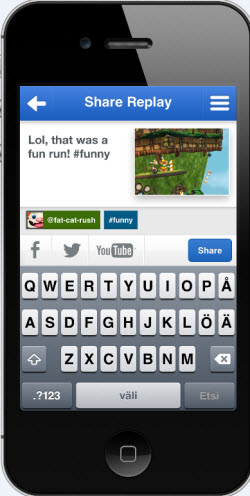 Helsinki-based Applifier is inviting game developers to join the Everyplay beta today. Applifier chief executive Jussi Laakkonen plans to talk about the service at the Unity Technologies Unite 2012 conference in Amsterdam this week.

“Word-of-mouth is the most powerful tool for mobile app discovery,” Laakkonen said. “Everyplay makes those ‘Hey, you got to try this app’ moments sharable by letting users share their own awesome, funny, and outrageous gameplay experiences through videos with friends. Mobile phones are the most personal gaming devices ever, and we want to make mobile games just as personal with action replays and video messaging between players.” 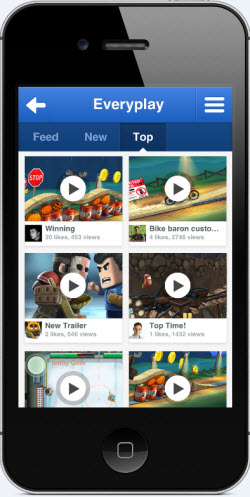 Everyplay can help developers attract, engage, and retain players in a mobile game. Users can record their game performance and share it as a video, much like they do with Call of Duty games, showing off the best snippets of play on sites such as YouTube or Machinima. Users can easily edit the video to capture the best few seconds of the replay. Video sharing lets players express their personalities and brag about their authentic achievements in games.

Everyplay shares videos on Facebook, Twitter, and YouTube. Developers can build a community directly within the mobile game. Players can send video messages to each other to celebrate, challenge, or taunt friends. It is a free service on iOS (Apple’s iPhone, iPad, and iPod Touch) devices.

Applifier previously created a cross-promotion network for game developers to promote each other’s games on Facebook. That network has 150 million monthly active users. In July, Applifier added Impact, a video advertising network in which developers promote games to each others’ audiences via video ads of game play on Facebook. Each of Applifier’s services is about solving the problem of discovering games amid hundreds of thousands that are available in modern app stores.

Here’s a full description of how Everyplay works:

Q: How does the sharing flow work?

A: Here’s the flow:
1) User gets a game over screen with an instant replay
2) User taps to watch instant replay in game over screen
3) User taps to share
4) User can crop the video to only show the meaningful bits, add or remove voice / video commentary
5) User gets the video sharing screen
6) All videos are shared on Everyplay, and the user can select to share to any networks he is connected to e.g. if he taps on FB, then the video is also posted to his FB stream
7) Videos are tagged with a) the game the replay comes from and thus appears in the feed for for other players who follow the game, b) with any hashtags the user wants to use and will appear to players who follow / search those hashtags
8) For a video to appear on a developer’s game page’s main feed, the video needs to be liked or shared by the developer (i.e. the developer curates his main feed), but they will be found under the “all videos” for that game page always

Q: Is the front camera recorded by default?

A: No, it is not recorded by default. The user needs to opt-in to front camera recording. The user can remove the front cam before sharing, keep the just the audio or re-record video commentary on top of a previous replay. It is all driven by the user and always opt-in to get the front cam and opt-in to share.