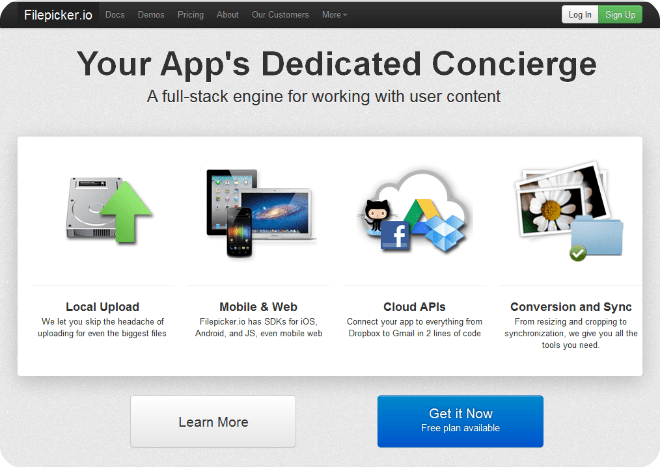 It infuriates developers that most smartphone operating systems don’t have integral connections to online cloud storage. Filepicker.io wants to change that.

The Y Combinator-backed startup, which recently developed and launched its mobile offering, builds tools that make it easier for developers to integrate access to cloud services within their apps on the web, iOS and Android. With the Filepicker.io Mobile Library, developers can add integrations and connect to popular places where users store content such as Google Drive, Facebook, and Dropbox.

Filepicker.io’s developers — Liyan Chang, Anand Dass, Thomas Georgiou, and Brett van Zuiden — met at MIT in Fall, 2011 and subsequently won the MIT 2012 $100,000 Entrepreneurship Competition. They moved to the Bay Area when they were selected for the current batch of Y Combinator startups.

I caught up with Dass (pictured left) at the Y Combinator Demo Day shortly after they took the stage in the hopes of securing a first round of funding.

For users, it’s a relatively simple pitch. Filepicker.io makes it easier to share content stored in different places. Dass gave me an example: I am using an iPhone and want to email a friend a photo from Facebook. Today, you would have to download it from the Facebook app and re-upload it to an email.

For developers, the slick U.I. gives them a competitive advantage. The startup currently makes money by charging developers up to $500 a month, depending on their data usage.