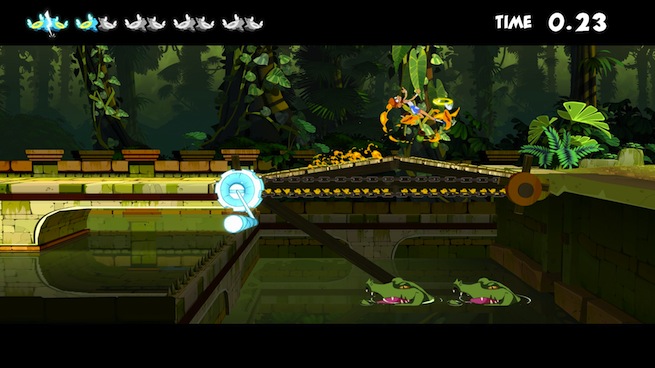 When you name drop a company like Disney as inspiration for your new game, citing many of its revered 2D animated films like The Jungle Book or The Lion King, you better have the art, animation, and music to back it up. Developer Moonspider Studio went one step further: It actually hired veteran Disney animators to work on its upcoming downloadable game, Harold.

Planned for release on Xbox Live, PlayStation Network, and PCs in early 2013, Harold is a side-scroller that puts you in the role of a guardian angel who’s assigned to help the lovably lazy Harold compete in a global marathon against other guardian angels and their runners. Using your heavenly powers, you give Harold a hand in navigating past a series of deadly obstacles — and this assistance includes sabotaging your competition. But shooting for that No. 1 spot won’t be easy, as the game is unrelentingly fast, requiring intense level memorization and split-second decision making to shave precious seconds off the clock.

And so far, Harold looks fantastic: The two courses in the demo, one in a jungle and the other in an Egyptian desert, feature lush 3D environments rendered on a 2D plane. A cloud of dust kicked up from Harold’s feet lingers as he rushes to the finish line; obstacle courses pulse with life from a series of moving platforms, animals, and your disembodied guardian angel gestures. The bright color palette looks like it came straight off of a freshly painted animation cell. Even its soundtrack, or what little I heard of it, is infectiously charming with its gospel choir-backed vocals.

“A lot of people say that 2D’s old, it’s finished. And now the new stuff is 3D, that it’s an evolution. I don’t agree with that at all,” said Loris Malek, CEO of Moonspider Studio. “For me, even now, the 2D world does some stuff that the 3D can’t do. And 3D, of course, has technology and all that stuff that 2D can’t do. So I really tried to take both worlds — pros of every technology without the cons — and combine them together to have this overall style of 2D, but with all the new technology of 3D.”

To help achieve this effect, Malek assembled a team of film animators for his self-funded studio in Miami, many of whom worked for Disney for nearly 20 years before choosing to remain in Florida after the Orlando animation studio closed in 2004. And according to Malek, one of them is the only animator in the world who’s resume includes both Disney and Studio Ghibli, the highly respected Japanese animation studio known for its own set of memorable films like My Neighbor Totoro and Princess Mononoke. 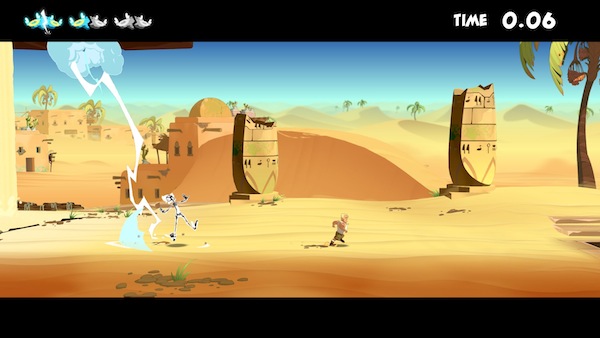 With a dash of Chuck Jones

While Harold appears to capture the whimsical aspects of Disney’s animated films, the source of its slapstick humor comes from another classic cartoon: Looney Tunes.

“In 2D, especially in like old Chuck Jones [cartoons] like Roadrunner and the Coyote and all that, you have this squash and stretch of all the characters, elastic and stuff,” said Malek. “And in 3D, it’s very difficult to do this technology. No engine right now handles that kind of stuff, even Unreal. And I’m working with Unity here, and we had to create an entirely new system of animation, on top of Unity, to manage [it all].”

To demonstrate this, he slowed the gameplay down to almost a frame-by-frame level and activated the turbo power, which sends a bolt of lightning right through Harold, shocking him enough to run faster for a short amount of time. When slowed down, you can see Harold’s elongated body, where his head, chest, and torso start to lag several feet behind his rapidly moving legs as a way to convey a sense of electrically charged speed.

In another scene, you can quickly flip down on the analog stick when Harold crosses a wooden bridge, giving him a small speed boost. You can see the way his arms dramatically stretch as individual panels curve up and over to push him to the other side.

Harold reminds me a lot of Rayman Origins, Ubisoft’s critically celebrated 2011 reboot of its 2D platforming mascot. Though Malek acknowledges that game’s technical achievements, he insists that the technology behind Harold is something that’s never been done before.

“The big difference for me on Rayman or other games like Dust is that there’s nothing really new in these games,” Malek said. “What they did is just take the exact same technology you can find on the Super Nintendo from 20 years ago and just [upgraded it to high definition]. But us here, we really tried to make almost everything in 3D…. So it was a very big challenge to get this 3D environment with the 2D render, which is for me, the biggest difference for this kind of game.”