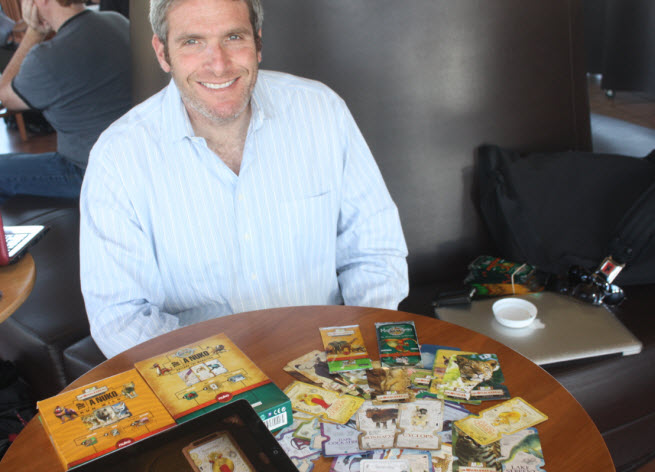 After years of work, Nukotoys is finally kicking off its grand plan to be Silicon Valley’s toy company. It’s launching a combination of paper-based trading cards that work with Apple iOS (iPhone, iPad and iPod Touch) devices. The Animal Planet Wildlands and Monsterology-themed games go on sale today at Apple Stores and national retailers.

The “Nuko-powered games” combine physical cards with mobile games. You can buy the cards in trading packs for as little as $1.99 and then tap them on the screen of an iOS device. The apps then magically spring to life, showing gameplay with wild animals or monsters. The apps are free-to-play (you can play for free and pay real money for virtual items) and on the iTunes App Store. The cards are also available at Toys “R” Us, Target, and Walmart.

Just getting these apps and cards to the market has been a huge journey for San Francisco-based Nukotoys, said Rodger Raderman (pictured above), the co-chief executive of the company, in an interview with GamesBeat. (Nukotoys was the winner of our tablet startup contest at MobileBeat 2012). 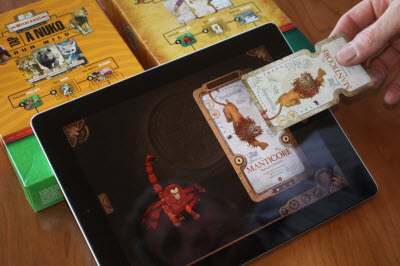 “We combine the technology of Silicon Valley with the creativity of toys,” Raderman said. “We want to be a company that merges the real world and virtual play.”

Raderman and co-CEO Doug Penman have Nukotoys worked on the startup since 2008. At first, they started working with radio-frequency identification (RFID) technology that worked with laptops. But the iOS devices and their wireless transfer capability became an obvious choice as they gathered momentum. Nukotoys pivoted and rejiggered its plans.

It has teamed up with Templar Publishing, the creator of the New York Times best-selling Ology books (Wizardology, Monsterology, Vampireolog, Egyptology, Pirateology, Oceanology, Dragonology, and Mythology). Those books have sold more than 20 million copies. And it has a deal with Discovery Communications, the owner of the Animal Planet TV network, which has hundreds of millions of viewers.

Those brands will hopefully turn the app games and playing cards into instant hits. The Monsterology books will have stickers that point consumers to the apps, and this fall volumes of the books will come with three card packs. That will give the games huge visibility, Raderman said.

When you tap a Nuko card on the screen of an iPad, the app imports the contents of the card into the game. The card activates touch code technology, which uses the capacitive energy from your hand, channelling it into a circuit pattern printed into a card. The conductive ink in the card is readable by the touchscreen. It requires no camera, no external reader, and seems pretty magical to kids (and adults too). Nukotoys licensed the technology and is the first to bring it to market.

For Monsterology, if you have a card for a Cyclops character, the app will generate a 3D animated Cyclops on the screen. Raderman said the team put a lot of effort into creating stunning 3D graphics and dynamic gameplay, where you can improve your chances in a monster fight if you have a card for a powerful character. Your quest is to collect 100 cards, including 75 monsters, 15 items, and 10 traps from the 3D worlds of frozen ice, volcanic regions, and forests.

In the Animal Planet Wildlands apps, you can visit a 3D landscape of the African savannah, where you can collect, trade, and interact with and learn about 50 exotic animals. Once you “tap” an animal into the environment, you can run around it, taking part in races and quests. If you have a lion, you can run down its prey with “takedown” moves.

Nukotoys is selling packs of three for $1.99 and seven cards for $3.99 at the national retailers. Apple Stores are selling a premium collector’s box set with 28 cards for $19.99. You can also purchase virtual Nuko cards via in-app purchases from within the app. The games are aimed at kids 7 and up.

Nukotoys’ advisory team includes Richard Garfield, the creator of Magic the Gathering and Pokémon; Peter Adkison, the founder/CEO of Wizards of the Coast, publisher of Magic and Pokémon; Gordon Radley, the former president of LucasFilm; Tom Kalinske, a former CEO of Mattel, Sega of America, Leapfrog, Knowledge Universe, and Matchbox; and Karen Gruenberg, a longtime leader at Children’s Television Workshop. Those advisers were key in getting the cards into retailers and setting up the relationships with the brands.

Rivals include Activision Blizzard’s hybrid toy-game Skylanders products. Nukotoys is also live in Australia, New Zealand, and the Middle East. It will expand into Europe in the fall, and the company is in the process of negotiating major licenses that it will develop for 2013 launches.