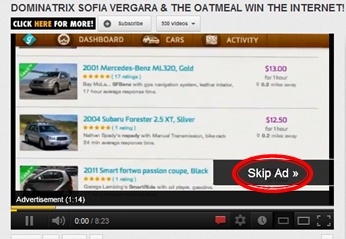 Viral videos are not just about cute cats anymore.

Video platform Virool billed itself as a “video ad network for the modern age” today during its pitch at Y Combinator’s Demo Day.

According to founder Alexander Debelov, video is by far the most engaging and effective way to communicate information to the masses. Virool lets companies distribute their video content across multiple online publishers, which boosts views and exposure for the companies. Rather than stagnant banner advertising or lightening-quick video clips, Virool’s platform promotes videos that tell the stories of a company, service, or product.

Developers integrate Virool’s API into their apps to deliver relevant videos to their audience. The technology makes it easier to execute successful, wide-reaching video advertising campaigns. Advertisers can also benefit from tracking who is watching their content, and from where, in real time.

The platform already works with thousands of advertisers and is adding more every day.

“Every time a new ad unit is invented, a company is made,” said Debelov. “Banner ads made Yahoo, search ads made Google, and video as an ad unit makes Virool.”

This is quite a lofty claim, although it’s based on impressive traction.

Advertisers have been able to quadruple their money after using the platform, and 78 percent of clients are repeat customers. The success translates into dollars for Virool, as well as for companies. It makes 12 cents every second and has seen impressive growth. It made over $240,000 in July — and $150,000 in first week of August alone.