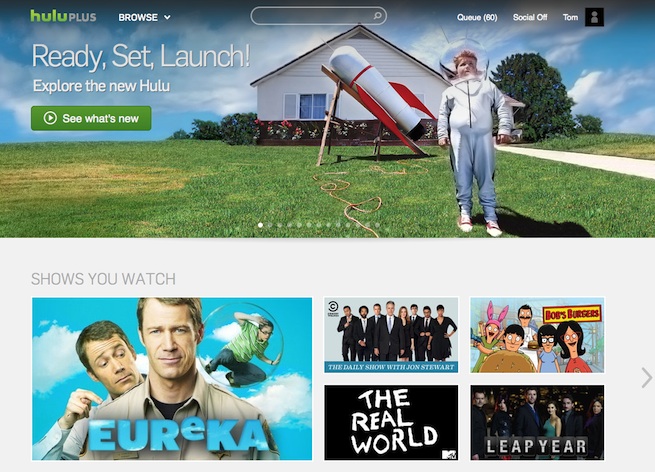 Streaming video service Hulu has been focused on revamping its design lately. Today it took the design emphasis a step further with a fresh new homepage.

The company revealed an overhauled website that focuses on the rich library of content from major broadcast stations and notable cable networks. As you can see from the screenshot above, the top of the page’s episode art ditches the darker “boxes” on either side in favor of a wider image, thus submerging you further into a scene.

Hulu also got rid of the countless video thumbnails plugging popular episodes, clips, and shows, which I always found as pretty worthless for discovering new content. Instead, the company is implementing a new “tray-style format” for videos based on a common theme. The first of these is a “shows you watch” tray, followed by “popular this week” and “going viral” trays. Beyond that, each tray has a common theme similar to how Netflix groups its video recommendations. For example, Hulu has added a kids-themed tray as well as a “SNL presidential skits” tray.

The design also has much in common with the new (formerly referred to as “metro”) Windows 8 tiles user interface. The company, which mentions viewing the new Hulu homepage design in the Internet Explorer web browser at the bottom, might have even worked with Microsoft on the new designs. Such a move wouldn’t be unprecedented either, as digital magazine service Pulse News recently worked with the tech giant for its new web-based desktop reader.

While the new design is definitely a step in the right direction for Hulu, it might have little effect. A memo recently surfaced that suggests Hulu will soon lose its competitive advantage of getting prime-time television content relatively soon after it airs on traditional television.