The capability for Netflix users to search for movies by actor or director is one of the service’s most useful features. And users of the Netflix’s Xbox app will be happy to hear that it’s now on the Xbox 360. 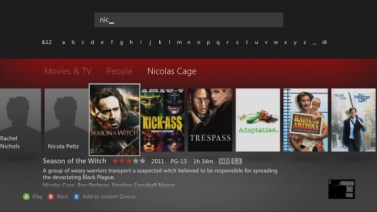 In the blog post announcing the addition, Netflix uses the example of a user searching for movies featuring Nicholas Cage, who’s appeared in over 60 films. While Netflix doesn’t offer all of them via Instant Streaming, the service does make it far easier to find the ones that it does feature.

Strangely, the feature was actually a part of Netflix’s August 8 update to the Xbox app, though the company didn’t do a great job of calling attention to it. (It’s “Just for Kids” section news apparently got all of the limelight.)

Search by People is a big deal for users of the Xbox version of Netflix, as it fits well into Microsoft’s strategy of making it as easy as possible to find and watch content on the Xbox 360.

Netflix plans to bring the feature to other platforms in the future, and for owners of devices like the Roku, that day can’t come soon enough.