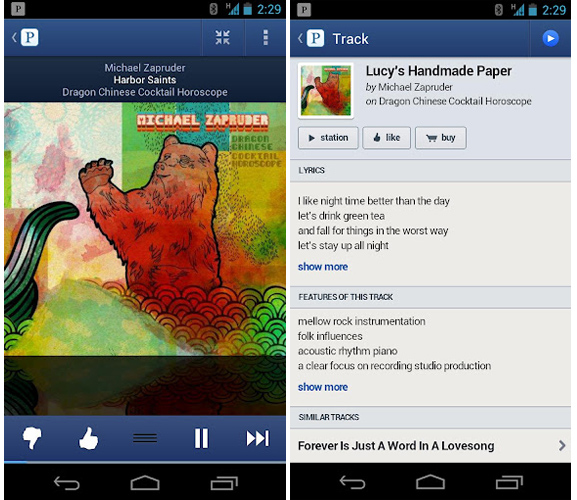 Pandora’s new Android helps it stay competitive in the busy digital music landscape. With more than 50 million installs of the app in the U.S., it has a significant reach. It also gives people a reason to keep jamming to tunes on Pandora rather than other services.

The new app includes a more polished interface with the capability to better explore and assess the music you listen to. First, it has a song history, so you can review, rate, or bookmark previously played tracks. You can also see song lyrics to whatever is playing, read artist or band biographies, and view similar tracks and artists. It also claims to include various bug fixes.

The app update comes at a time when Pandora has an incredible number of users and growth but can’t seem to turn a profit. In first quarter of 2012, Pandora’s active listeners grew 53 percent to 51.9 million. The total number of hours listened to for the quarter hit a staggering 3.09 billion.

Competition has increased recently, too, with new Pandora-like apps from Spotify being launched recently on Android and iOS. There’s also TuneIn, which provides a digital access point to 70,000 terrestrial radio stations around the world.