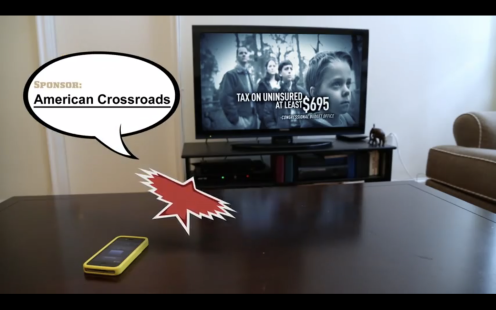 Political ads can be deceiving, hiding behind the glitz of their presentations the motives of the groups that run them.

Identifying those groups is the idea behind Ad Hawk, an app for Android and iOS that listens to political ads and gives users the scoop on who spent the money to get them on air.

In addition to identifying advertisements, Ad Hawk also tells users where they’ve been aired and how much money candidates have spent on the campaigns surrounding them.

In that sense, Ad Hawk is similar to apps like Shazam and SoundHound, which identify songs based on their audio fingerprints.

Ad Hawk comes via the Sunlight Foundation, an educational organization that also created Realtime Congress, an app that offers up-to-date information about (you guessed it) Congress. The organization says that the idea for Ad Hawk came about at a Philadelphia Hackers meetup last December. It’s sure to come in handy this fall.

Below is a somewhat corny video giving an explanation of how Ad Hawk works.