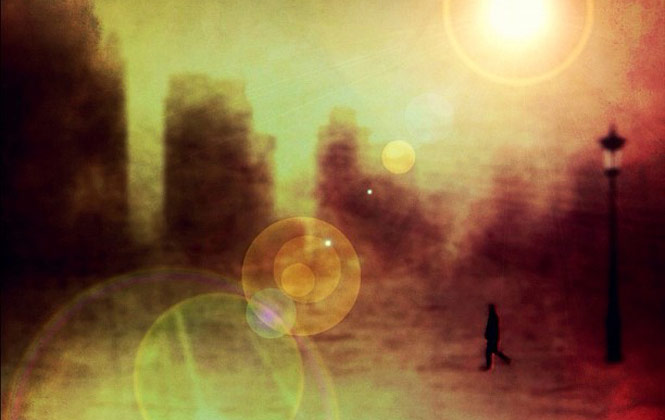 ComScore released its July 2012 Top 50 web properties in the U.S. report yesterday, and it has a few surprises.

Old people are big on the web, apparently, as AARP web properties jumped 21 percent, Sun Microsystems has risen from the dead, and MySpace continues its slow drop to oblivion as Tumblr elbows its way above yesterday’s social network.

The Facebook acquisition and continued execution by the Instagram team translated to 38 percent growth in the month of July. Instagram.com is now the 56th most popular site in the U.S., with 22.7 million unique visitors, up from 16.5 million in June.

And that’s all with a website that contains almost no content besides a blog and developer support, unless you come in via the app or a social network to see an Instagrammed picture directly.

One big surprise in the top gainers: Sun Microsystems.

Apparently it grew 32 percent from 7.7 million to 10.2 million visitors, despite being dead, and sun.com redirecting to Oracle’s website. This is a headscratcher — Sun has been a popular website in the past, but why it is gaining now, and how ComScore is finding this are big question marks.

I asked ComScore for more information, and this is what Andrew Lipsman, the company’s VP of industry analysis, told me:

Sun Microsystems is the web property, and it would include a number of other sites for products that Sun owns. There may have been a software update this month that drove traffic to something under the Sun umbrella.

Tumblr continues to win as it surged past MySpace as the 43rd most popular site in the U.S., and the top slots are held down by the big boys: Google with 190 million uniques, Microsoft with 168 million, Yahoo with 162 million, and Facebook with 160 million.

The next big move is probably Facebook surging past Yahoo and Microsoft sites. 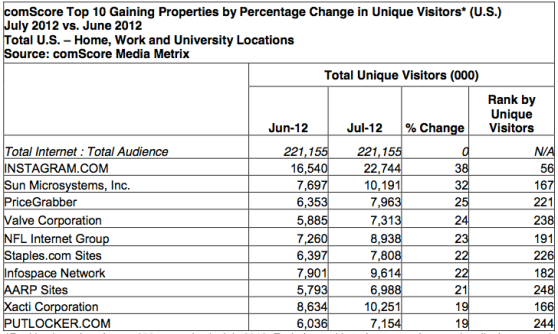 And the top sites overall: 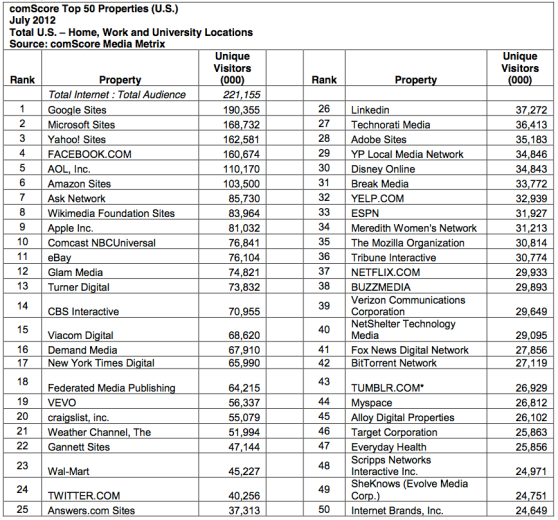 Above: ComScore July 2012: top websites in the US