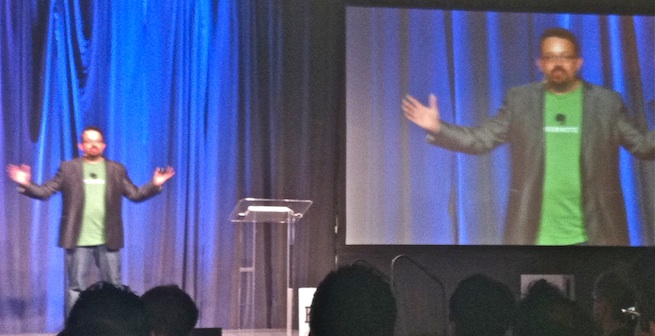 It’s official: Evernote is more than just a repository of your personal notes. At its Trunk Conference in San Francisco, a venue filled with thousands of developers, the startup announced that it will roll out its beta geared at supporting small and medium-sized businesses.

“Our definition of who we are keeps expanding,” said Evernote CEO Phil Libin, who took the stage this morning to offer insights into the new tool. The key features in the new release include:

At the conference, Libin said he has experienced some impressive growth in 12 months: It has tripled its userbase and now boasts 38 million notetakers worldwide. Last year, 5,000 API developers used the platform, and now more than 15,000 do so, thanks in part to the recently launched Developer Voice Program.

He also hinted at the company’s grand plan.”We want to be the Zynga of being productive, of saving time,” said Libin. Evernote will be a “cognitive tool to make you think,” he added.

To support this goal, Libin said they have been introducing intelligent features in the past months like automatic titles and autofiling for clipper notes (Evernote can incorporate tags you probably meant to include on your note).

Companies interested in beta testing Evernote Business can sign up here. Evernote plans to make the product generally available in December. The pricing will be $10 per user per month.

I hope he wasn’t joking — Libin promised today that if you sign up, you’ll receive a pair of Evernote business socks.