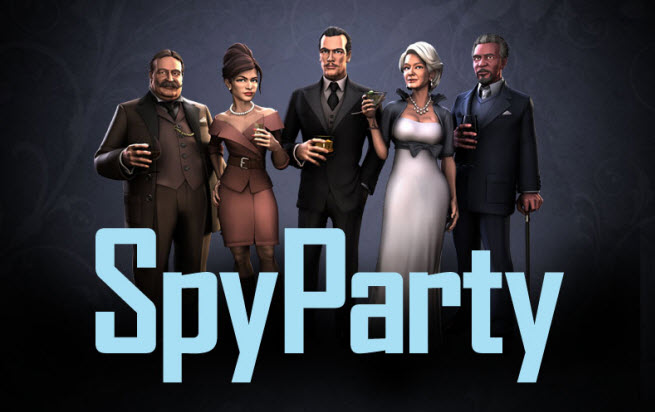 Indie game developer Chris Hecker has drawn a lot of attention for his SpyParty game in development. Today, he’s unveiling the company’s art style (pictured above), which he calls “naturalistic.” 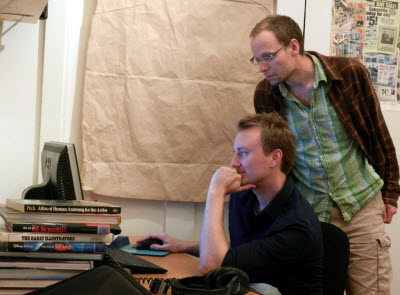 SpyParty, which has been in the works on and off since 2008, is now a two-man show, as Hecker has added a well-known artist to his team. Hecker (pictured standing) has been working on the character art with artist John Cimino (pictured seated) since September, and he is now revealing the first five characters in the game.

In SpyParty, two players try to outwit each other and uncover details through subtle behavioral hints. One player acts as a spy, trying to plant a bug on an ambassador at a cocktail party. The second player is a sniper, trying to identify and take out the spy with a single bullet. The sniper has to watch the party through the windows to figure out which one of the characters is under the control of a real person.

Up until now, the game demo has had placeholder art (Hecker hopes no one has become too attached to it). The unveiling of the character art shows that Hecker is making progress in a game that has received praise for its original approach.

“The word we use to describe the style is naturalistic, like an illustrator, or the kind of images that people drew before there were cameras,” Hecker said in an interview with GamesBeat. “We made the choice to not be realistic. You can spend millions of dollars to make realistic characters like in L.A. Noire, but I still think those games look creepy. When those realistic humans start moving in a game, it’s just a disaster. So we tried to be conscious of that.”

As you can tell from looking at the eyes of the characters, the SpyParty art style emphasizes subtlety, Hecker said. The characters in the picture are not from any specific time in history.

“I want the art style to reflect the subtlety of the gameplay,” he said. “It’s not too exaggerated.”

Hecker worked with Cimino at Electronic Arts’ Maxis division for six years, working on Spore. Hecker considered Cimino to be a great character artist who was underutilized, working on alien characters.

“Most games out there have space marines or orcs. Here, we’re going to have something like 20 or 30 human characters,” Hecker said. “I knew John was the perfect artist for this.”

Hecker previously worked on Spore and is a longtime advisory board member for the Game Developers Conference. He is known for his past work in creating realistic physics in games and worked at Microsoft in the early days of Windows gaming. He has delivered frequent rants against corporate game publishers (he won the Duct Tape award for his anti-Nintendo Wii rant) and is passionate about indie gaming.

Hecker is busy working on the game and expects to have a paid beta version soon. He has 17,000 people signed up for the beta test, but doesn’t know exactly when it will be opened up. The paid beta, which follows the pattern set by Notch with indie-sensation Minecraft, is Hecker’s way of financing the game and keeping control of the project. Hecker said he has created at least three maps for the game, but he is not yet ready to show off any art for the environment.

Check out the gallery of art below.