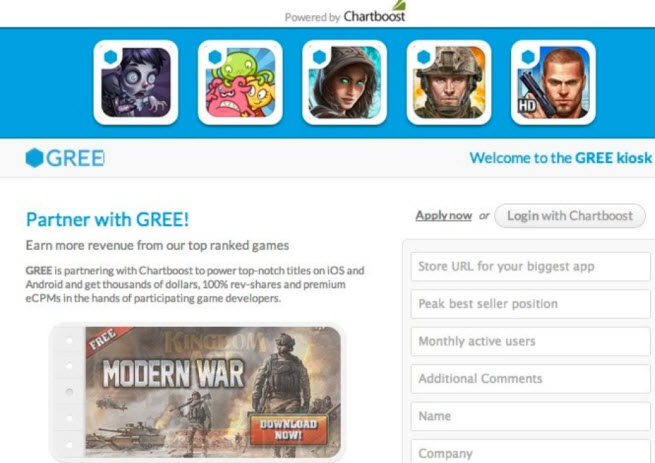 Chartboost aims to make mobile game developers more profitable by expanding the monetization options for its Kiosk program, where developers and publishers can tap each other to generate more excitement about each other’s games. The company is essentially becoming a better matchmaker for advertisers.

The whole system is designed so that developers can keep more money in their own pockets, rather than spending money on ad networks that promote games to mobile users. Under the Kiosk program, major mobile game publishers Gree, Booyah, Kabam, and Crowdstar will purchase ads so they can gain more users. Developers can approach those publishers and get them to advertise their games within the developers’ own. For example, Crowdstar, which specializes in mobile games for girls, might choose to advertise within the game of a developer with the same target audience.

Each of those major publishers will have multimillion-dollar ad campaigns, said Maria Alegre, the chief executive of San Francisco-based Chartboost, in an interview with GamesBeat. And they will spend their money within Chartboost’s network. Effectively, Chartboost matches small developers with bigger publishers, and that generates money for the former. Publishers like the ability to reach users who are playing small developers’ games because the same group is likely to enjoy the big publishers’ releases, too. Alegre said the company launched the Kiosk program with Pocket Gems in March and TinyCo in July.

“We give developers more freedom and control [with] how they make money,” said Alegre. “It’s a place for advertisers to say, ‘Hey, I have all this money. Who wants it?’”

Each small developer also gets a chance to build strategic relationships with larger mobile game companies. Crowdstar will offer a total of $1 million to members of Chartboost’s network. It will pay that money for advertisements in the smaller developers’ games, with up to $50,000 paid to each company. Kabam will allow developers to earn up to $30,000 by promoting its games in the month of September. Gree will offer $3.50 per install, with no revenue cap, so that small developers can send players to Gree’s games, including the hit titles Zombie Jombie, Dino Life, Modern War, Crime City, and Kingdom Age.

Booyah, meanwhile, will offer up to $2 cost per installs for No Zombies Allowed and MyTown2. Chartboost operates a Direct Deals Marketplace with a network for game developers to connect and negotiate advertising deals. Developers can test advertising campaigns with thousands of games, identify the best performing partners, and find the best fit for direct deals without parties having to pay 30 percent to an independent ad network. Chartboost’s network has more than 5,000 mobile game developers already, and those developers host more than 3 billion game sessions per month. That means there are a lot of eyeballs that will see ads displayed via Chartboost’s network. The company reaches more than 105 million unique users in 100 countries.

Chartboost has raised $2 million from Translink Capital, SK Telecom Ventures, and XG Ventures. It was founded in 2011 and has 28 employees.