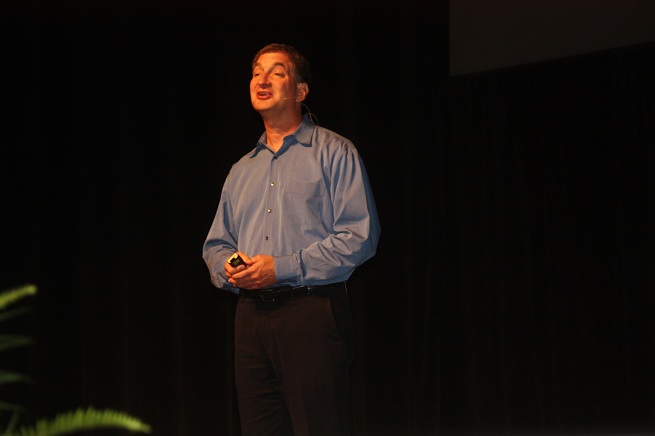 The ‘surround computing’ era is coming soon, according to Mark Papermaster, the chief technology officer of chipmaker Advanced Micro Devices.

In a talk at the Hot Chips semiconductor design conference in Cupertino, Calif., Papermaster said that the enormous growth of sensors and mobile computing devices will produce a huge explosion of data that will overwhelm traditional data centers. We’ll be surrounded by computing everywhere, which explains why Papermaster calls the time ahead the surround computing era.

“Of course, there is change in the industry and you can integrate more things together on a chip,” said Papermaster in an interview with VentureBeat before his talk. “But how you integrate things together matters. We’re going to have a data overload and an interface overload.”

Surround computing will put a lot of pressure on existing infrastructure. Unstrutured data such as video is expected to grow from 245 exabytes of data in 2010 to 1,000 exabytes by 2015, according to Cisco. Some 10 million new servers will likely be needed in data centers to deal with the change.

The technologies making the demands include natural user interface gesture recognition, fingerprint,or face recognition, augmented reality, content accessible anywhere, video game experiences, and audio-visual content management, he said. All of that computing will be done not at the point where the sensors are but in the mobile device clients and the centralized data centers, Papermaster said. Both clients and servers have to be smarter and far more power efficient.

Papermaster has worked at AMD for years and has also been a top engineering executive positions at Apple, Cisco, and IBM.

He said the change in computing will be driven by data produced by things such as our voice (like Apple’s Siri voice recognition technology in the iPhone) and face or gesture recognition. AMD is creating a flexible computing technology for everything from mobile devices to servers.

“You see experimental devices out there today like eyeglasses” with computing, as with Google’s Google Glass project, he said. “There’s much more fluid processing that has to happen to give you answers immediately.”

Consumers may not notice the changes themselves, except that their devices are much more capable. The advanced technology itself will be invisible, hidden in distant data centers, or the web-connected cloud, that handles a lot of the processing tasks.

“The amount of information around you that you can access is exciting, and scary,” Papermaster said.

And of course, the “APU will be the platform of choice in computing,” he said.