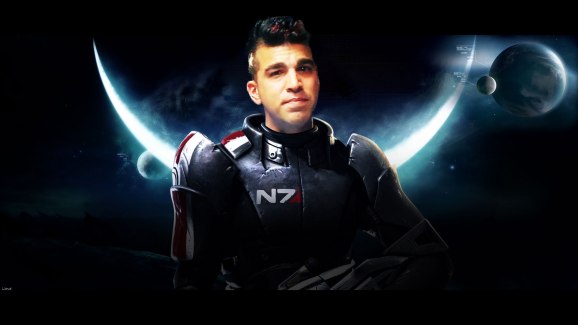 Nowadays, everybody wanna talk like they got somethin’ to say, but nothin’ comes out when they move their lips — just a bunch of gibberish. VentureBeat readers act like they forgot about Mars.

But seriously, we haven’t forgotten about Mars and everyone’s favorite lil’ rover buddy up there, Curiosity.

In this video, Internet hero Bobby “Starry Mohawk” Ferdowsi leads us through an update on the rover’s progress (with Morse code for “JPL” shaved into the side of his meme-spawning head, no less).

This week, Curiosity’s Martian road trip began, complete with road tunes from Will.i.am, analysis of Mars’ atmosphere, and lasers being used on the planet’s surface for, you know, science. Lasers will come into play more as Curiosity rolls toward one of its targets, Glenelg, an intersection of three types of terrain near the rover’s landing site.

“The rover’s Chemistry and Camera [ChemCam] instrument shot its laser at rocks exposed by thrusters on the rover’s sky crane at the scour mark called Goulburn,” we read on the ChemCam site today.

“They show differences in brightness at the impact spot as well as a slight change in shadows. The inset shows an area about 1 square-inch [2.5 centimeters per side]. The target is about 19 feet [5.8 meters] away from the rover.”

Here are some before/after pics of the ChemCam laser’s work: