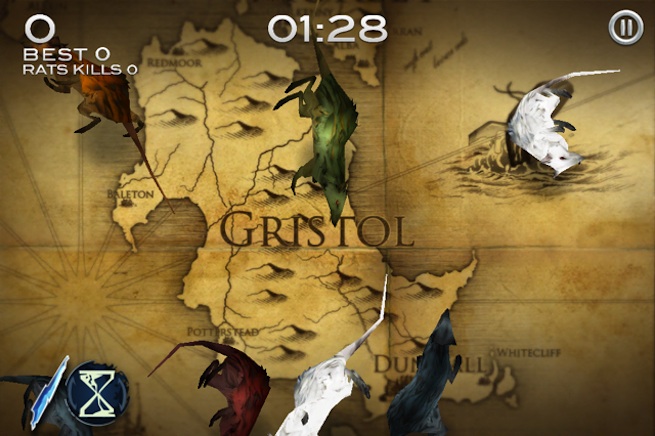 Revenge has to start small. You can’t just decapitate people out of the blue, after all. So to prepare us would-be supernatural assassins, publisher Bethesda released Dishonored: Rat Assassin for iOS devices, a free spin-off of Arkane Studio’s upcoming first-person action game.

Developed by Quantum Squid, Rat Assassin will feel familiar if you’ve ever played Fruit Ninja or the myriad of other slice-and-dice titles on the App Store; except instead of slicing food, you’re cutting up rats. Those vile rodents are responsible for the deadly plague that’s spreading throughout the city of Dunwall, the primary setting in Dishonored’s bleak-looking world.

And for a free mobile game, it’s surprisingly deep.

The better you can pull off your combos — basically killing as many rats as you can in one continuous swipe — the better the equipment you receive. In addition to upgrading your blades with different powers, you can unlock new “walls” (like the map above), a new enemy (the dreaded Hagfish), and special objects like Whale Bone charms (giving you the Shadow Skill ability that can turn rats into ash). You can also trigger Bend Time, which slows the action down to a crawl if the rats are overwhelming you on screen.

Everything in Rat Assassin’s arsenal of powers are just a sample of the different kinds of abilities you’ll have in Dishonored, which comes out October 9 for Xbox 360, PlayStation 3, and PC.

Dishonored Rat Assassin is available now as a free download for the iPhone (3GS, 4, 4S) and the fourth generation iPod touch. Bethesda mentioned on its blog that an iPad version will also be coming in the “near future.”