CrowdCall, the conference calling solution that calls you, has reached 1 million calls per month just five months after launch. Next week, the company is announcing new features as well as new, supercheap pricing.

CrowdCall launched in March of this year, offering a novel approach to teleconferences: no numbers, no PIN codes, no scheduling required, and participants don’t even have to phone in to join the conference. Call organizers simply download the app (iPhone or Android), indicate who they want on the call, and CrowdCall initiates the teleconference.

Participants get a call and are automatically connected.

Today the service user base is doubling every month and has hit the 1 million-calls-per-month level. People are making up to 50,000 calls each day and using more than 10 million minutes of audio conferencing in 40 countries around the world.

I spoke with CrowdCall’s chief executive, serial entrepreneur Randy Adams, about the service and about the coming new features.

“I had a concept about a year ago that you shouldn’t need to know numbers to talk to people,” Adams says. “We released SocialDial, which had a group-calling feature, but it was hidden about two levels down.”

SocialDial, which is still the name of the parent company, had some traction with its app, but the most popular feature by far was group calling. So Adams decided to highlight only that aspect that by taking a chainsaw to the feature set and releasing an app dedicated solely to simplified conference calls.

(This is not the first time we’ve seen this move. Bump did something similar: Take the one great feature out of an app with many features, and make that feature the entire app.) 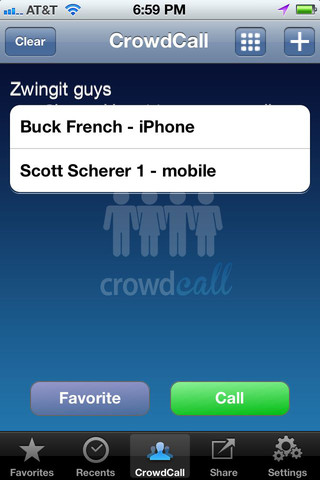 The result was crazy, hockey stick growth. Or, as I like to call it, rocket-stick growth.

“We’re literally getting 10,000 new users a day,” Adams told me. “We’re running to scale our servers and keep service from degrading … it’s a scary thing, actually.”

That’s without any advertising and not much press.

The one thing the company has done to promote CrowdCall is to text conference call joiners — not initiators who already have the app — one time, telling them that they have been “crowd-called” and suggesting they get the app as well.

“We haven’t spent a dime to get new users,” says Adams.

It’s not the first time that Adams has experience viral growth and adoption. When he cofounded FunnyOrDie with comedian Will Ferrell, they launched with one video, sent out 10 emails, and watched as traffic skyrocketed to 3 million views a day. Adams attributes it to the web and to the product.

“The web is incredibly efficient about spreading the word about things that are remarkable,” he says.

Next week, CrowdCall is moving to another level.

New features include calendar integration, audio controls, participant management, and recording and archiving — all the add-ons that can help the app go from that’s-very-cool-kid to an actual enterprise solution. And new pricing is coming as well, starting with free, as befits a viral app. Five-hundred minutes of calling to 40 countries is free, but heavier users can choose a $10 plan for 1,000 minutes, at $50 plan for 10,000 minutes, or unlimited calling to all those countries for just $100.

With hockey stick growth and monetization of a new service typically comes funding as well. CrowdCall, which started with $1 million in angel money, will be seeking venture capital in the next few months to scale and grow. The goal, Adams said is a million users by the end of the year.

After that, he hinted, even more disruption will be taking place.