It seems the proof of the iPad Mini pudding might be found in read it later application Instapaper’s device stats. Founder Marco Arment says while checking his logs yesterday, two unfamiliar devices tried to access the app.

Arment said he saw “iPad 2,5” and “iPad 2,6” in the stats, which follow the nomenclature of Apple’s iPad versions — iPad 2,4 being the cheaper, but upgraded version of the iPad 2 released alongside the latest iPad — though they do not yet exist in the market. Arment believes they may reference the rumored iPad mini, which some reports say might launch in the fall.

During Apple and Samsung’s patent trial, Samsung revealed an e-mail between Apple vice president Eddy Cue and a few of his colleagues in which he says the late Apple CEO Steve Jobs was willing to create a smaller version of the iPad.

“I believe there will be a 7-inch market and we should do one,” said Eddy in the e-mail. “I expressed this to Steve [Jobs] several times since Thanksgiving and he seemed very receptive the last time.”

Arment believes the two iPad references could be a nod toward the Wi-Fi and GSM versions of the iPad Mini, though he does mention the possibility that one of his users could be using a jail-broken phone made to trick people. 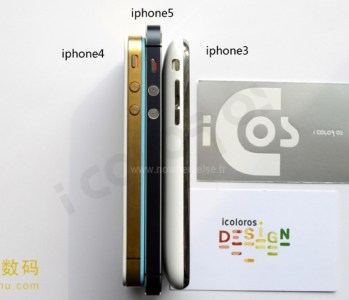 “But who would fake an oddly numbered iPad 2?” he said in his blog post. “A faker would almost certainly choose iPad4,1.”

It is rumored that the iPad Mini will launch in October after the iPhone 5, which is expected to be released on September 12. In the lead-up to that rumored date design company, iColorOS set up what it believes the next iPhone will look like, next to the iPhone 4 and iPhone 3GS. It’s notably longer and thinner than the other two. Check out the image right.