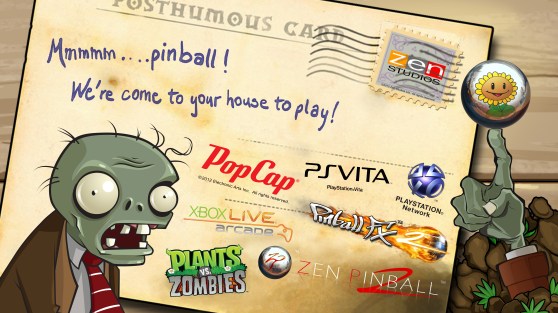 Don’t be fooled by any poorly written notes you might find that say otherwise: Zombies are definitely invading a pair of popular digital pinball games next week, and they almost certainly are trying to eat your brains. Luckily, you can fend them off in the new Plants vs. Zombies-themed DLC table for Zen Pinball 2 (playable on both PlayStation 3 and PS Vita) and Pinball FX2 for Xbox 360.

Based on PopCap’s popular lawn-defense game, the downloadable table will have players using adorable plants and adorable plant-related powers to hold back an ever-approaching horde of the undead (who are also surprisingly adorable). In the original game, you do this by strategically placing your plants in order to create an impenetrable anti-zombie defense. Here, you accomplish it by whacking the zombies with pinballs.

The Plants vs. Zombies table is available as a download next week, with the Playstation Network version (playable on PS3 and Vita) available for $2.99 and the Xbox 360 version for 240 Microsoft points (which actually comes out to $3). You can see the game’s trailer below:

We’ve also received word from someone (who assured us that they were definitely not a zombie) that the table is very easy and the best way to get a high score is to simply let the zombies win … but they could just be a zombie trying to eat our brains.