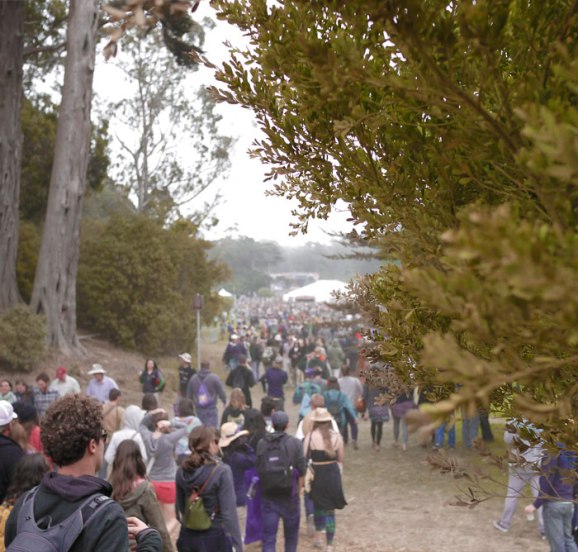 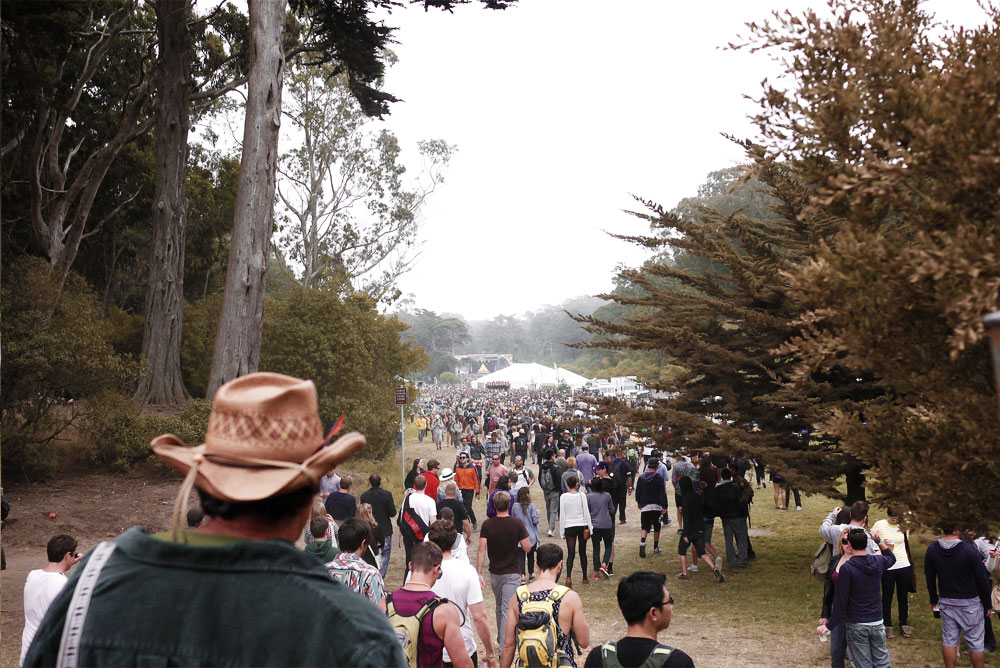 On any given day, Golden Gate Park in San Francisco is a shining example of more or less pristine green space in a densely packed urban area. Its trees tower, pulling up the blankets of fog from the ocean; its human-made bodies of water flow in intricate systems of streams, waterfalls, and lake chains; its wild blackberry bushes create a juicy bramble beside bike paths. Voles and foxes (and the occasional person) make their homes among the nasturium.

Then, for three days in August, 60,000+ hipsters each day pour into a handful of meadows, as thick and viscous as the fog itself, and the park is transformed into a raucous, wild music festival. Amps are stacked like ziggurats where last week a family was picnicking. An endless row of food vendor booths has taken up the bike trail. The air surges with amplified guitar fuzz and obscenities from the mouths of performers, and you can almost feel the ground shake from the trampling feet of a herd of humanity.

Somehow, Outside Lands takes Golden Gate Park from the city each year, turns it inside out for the love of rock & roll, then manages to return it in its original condition as though nothing had ever happened.

Such small miracles involve a lot of planning, a lot of volunteers, a lot of work.

During this year’s festival, VentureBeat took some time to meander around the festival grounds and talk to the many people who make up Outside Lands’ on-the-ground eco team. Here’s what we learned (read the captions for the rest of the story).

Of course, no efforts to “green” any event are going to be perfect. The roads leading into the park’s heart were still lined with gas-guzzling tour buses. Diesel generators still powered some of the main stage equipment. Drunken revelers still mistakenly tossed recyclables into the landfill-bound trash bins.

And yes, among the sincere efforts of volunteers and eco-focused groups, there were still a few greenwashing attempts — most notably by large corporations that had spent tens of thousands (or more) on Eco Lands booths to lure the young and impressionable toward the idea that any multinational gives a rat’s hind end about the planet more than it does about its own bottom line.

But overall, as we walked and biked through Golden Gate Park in the days after the festival, we were grateful and impressed by Outside Lands’ successful efforts to, minimally, return the place unharmed to those who love it year-round.