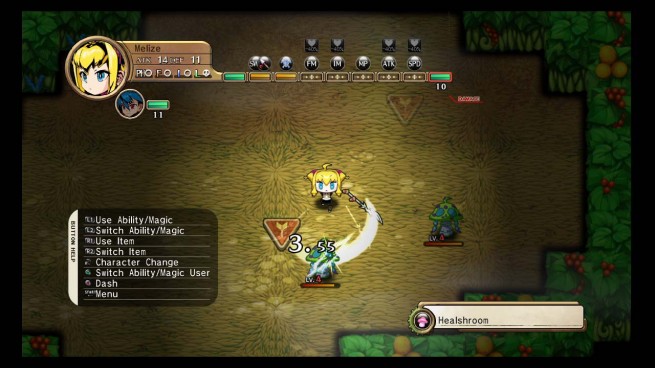 Do many role-playing game players still want games featuring aloof robots designed to look like 13-year-old girls and overly busty women in virtually no supportive clothing? I guess someone, somewhere, still consumes this very repetitive material, and its high time NIS stopped catering almost exclusively to that market. I know they can make inventive games. I reviewed Atelier Meruru earlier this year, and even though it fell victim to the same stereotypical trappings as Legasista, it utilized engaging, sensible mechanics and a story I wanted to care about. Legasista is just…boring.

The music
In true Japanese RPG fashion, Legasista has a lovely soundtrack. It’s reminescent of the jaunty, worldly tunes in games like Xenoblade Chronicles and Azure Dreams. In a world in which people lost touch with advanced technology in favor of magic, the soundtrack helps set the scene for an abandoned, overgrown research facility full of humanoid robots and talking bean sprouts.

NIS enjoys setting an adventurous tone in its games, and this happens almost entirely though music. Even Atelier Meruru relies on its score to help present the world as a magical, albeit dangerous, place full of sparkles and princesses. 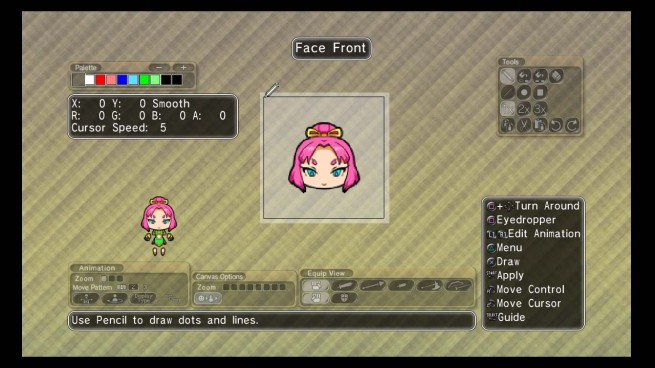 Character creation
If you enjoy meticulously designing or recoloring sprites, Legasista’s character creation tools will likely appeal to you. A few hours into the game, you can start hiring heroes to help you in progressively brutal dungeons. You can customize their personalities, strengths, and basic skills without too much trouble, but if you want to really make the characters your own, you can also design everything about their appearance.

You aren’t choosing from a set of ready-made noses, eyes, and mouths, though. You can select a predesigned sprite model or completely draw your own and/or upload an image you’ve made previously. While this mechanic is likely responsible for the very simple animations found elsewhere in the game, it is really amazing that the developers included basic sprite-making tools for dedicated players that like creating. 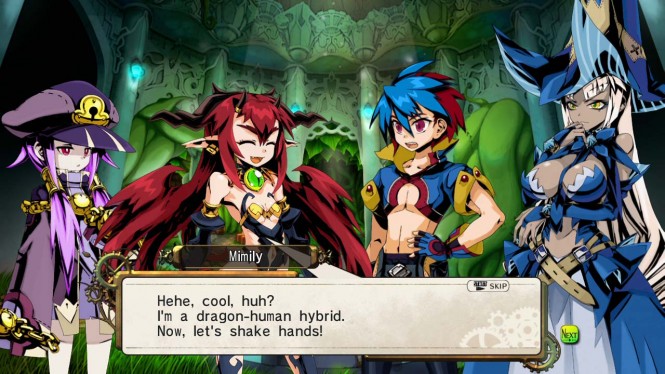 Predictable, boring characters
You can create a unique adventure while relying on archetypal RPG characters as long as you make them engaging, but Legasista’s developers didn’t even try. The game begins with a boy named Alto setting out on a quest to save his sister Mari. Ancient technology supposedly holds the key to turning this crystal-bound girl back into a person, but you must search a massive research facility to find it.

Oh, but then you discover that the legendary machine is actually a robot shaped like a little girl….

In the 21st century, I expect a bit more depth from RPG characters. Without it, developers are perpetually remaking games that felt tired in the late ’90s, let alone 2012. Legasista’s characters are straight out of the countless adventures that overburdened the first PlayStation’s later years and the designers did almost nothing to freshen them up. In truly clichéd fashion, little girl robots are powerful weapons, older women with very specific cases of elephantiasis in their chests are hyper-sexual and cruel to anyone younger than them, and very minor upsets turn into horrible conflicts because of “comical” misunderstandings.

Enjoyable RPGs require characters you don’t want to kill. Legasista sticks so close to NIS’s formula that you simply won’t care about them, no matter how shrill their whines are (and they do whine often). 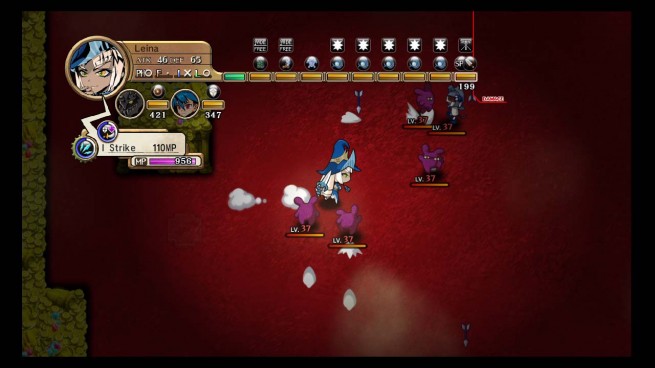 Combat
Winning fights as you explore dungeons is really a crapshoot. You can overlevel and equip all the best gear, but that doesn’t really mean anything when a fast-moving group of monsters pins you down.

Legasista presents itself as a grid-based dungeon crawler, only without the grid. Characters move in very blocky patterns and have methodical attack rates. Unfortunately, your enemies are almost always one step ahead or far better at cornering than you. The game recommends you use a various class types when designing your party, but in reality, all ranged characters will die thanks to their crippling slowness, so it’s safer to just use close-range swords.

That roguelike gameplay I mentioned before is also a detriment. In a roguelike, you rarely keep gained levels or healing items once you leave a dungeon, and weapons you pick up along the way are often inaccessible until you head back to your starting area. Legasista at least lets you keep your levels when you head back to camp, but the inability to take any healing equipment into a battle is a definite problem.

It’s easy to end up severely poisoned and/or injured before you find a healing item or health fountain scattered in each dungeon. What’s worse is that poisoning requires a specific cure, one that rarely appears unless you defeat monsters that perpetually inflict status effects.

Legasista would be much more enjoyable if it settled on one kind of game rather than combining annoying elements from both dungeon crawlers and roguelikes.

Legasista isn’t fun. If you desperately need a new JRPG to play, pick up Tales of Graces F, Eternal Sonata, or even NIS’s Atelier series. All of those games are infinitely better than this mediocre adventure full of annoying, stereotypical characters and needlessly frustrating mechanics. What’s worse is that the game looks more like a PSP title than something exclusive to the PlayStation 3, and it certainly isn’t worth a whopping $30.

Legasista is a role-playing game released exclusively for download on the PlayStation 3. It launched August 21 for $30. NIS America provided a download code of the game for this review.