As Facebook’s mobile troubles have shown, companies haven’t quite figured out how to crack the nut that is mobile advertising.

And worthless clicks aren’t helping. The name given to clicks on ads that don’t offer a significant return-on-investment, worthless clicks account for up to 40% of mobile clicks, says mobile app marketing platform Trademob. 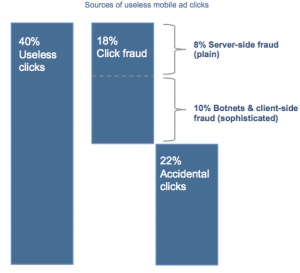 In survey conducted in June, Trademob analyzed 6 million clicks and found that a disturbing amount of them came from two areas: One group were the fat finger-induced “accidental clicks” which make up 22 percent of worthless clicks. These are a big problem on smartphones, where the lack of screen real estate often makes it difficult for users to accurately interact with on-screen objects.

The remaining 18 percent of useless clicks, Trademob says, come as a result of overtly fraudulent activity either from botnets or sever-side cheating by publishers. Engagement fraud is a big problem that’s plagued online advertising since the very beginning (and one that’s been troubling Facebook in a very major way lately).

The good news? The numbers are actually on the decline, dropping seven percent in comparison to a 2011 survey by Pontiflex.

So what’s the solution? Trademob says advertisers can improve their prospects both by blacklisting sources of worthless clicks and by improving ad placement (which Trademob, unsurprisingly, offers advertisers the ability to do).