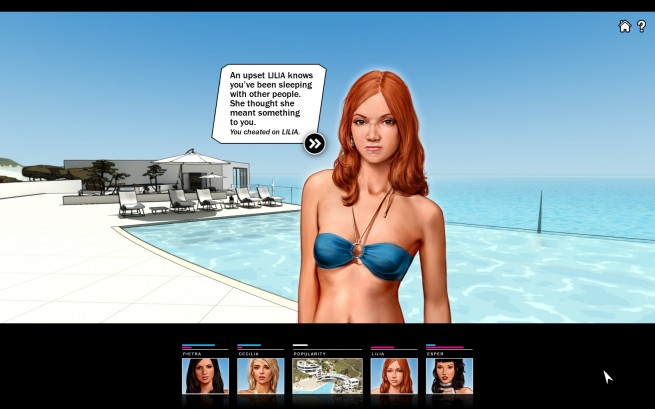 Steam’s Greenlight project isn’t even a week old, yet it’s already embroiled in a bit of a sex scandal.

Greenlight lets PC gamers have say in which indie games make it onto the Steam digital-distribution service, owned by developer Valve. Users can browse through submissions and weigh in on whether they deserve to have a presence in the online store. Considering that Steam is nearly synonymous with PC gaming these days, that can only help a title’s potential sales.

“You are visiting a celebrity socialite’s holiday home and are trying to become involved with one of the women there,” developer Miriam Bellard told GamesBeat in an interview. “To win — which you can do with one of four main characters — you must maximise both attraction and intimacy points with her. The gameplay is based on card games and board games, with a dose of RPG [role-playing game] thrown in.”

Everyone was within their rights here. Valve has every reason to curate and cut out content that it thinks is offensive. After all, it would be a shame if Steam suddenly became the Internet’s greatest resource for violent games about white supremacy. It’s just that sex isn’t white supremacy, and it seems exactly antithetical to the purpose of the Greenlight project to remove the user’s opinion just because the game features pictures of sex.

Although, maybe Valve doesn’t oppose the act of sex and instead believes the game objectifies women. 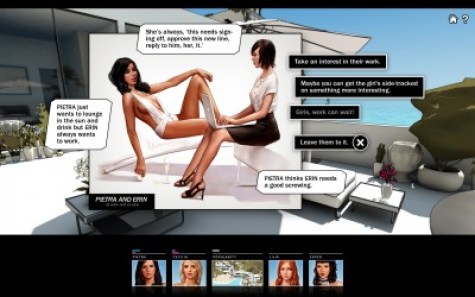 “I don’t think that the game objectifies women,” Bellard said. “The screenshots, taken by themselves, out of context of the actual game itself, could be said to objectify women, because in this context all we see of the women is what is sexually desirable. However, in the game itself, I have made an effort to give the women both a personality and a voice. In the game itself the women are more than just their bodies.”

Regardless, that anti-objectifying stance would be suddenly inconsistent with some of the other products on Steam that fail to take an evolved position on the female gender (this is a thinly veiled reference to Duke Nukem Forever).

Steam is the primary online-retail portal for PC games. It puts a product at a disadvantage if it isn’t  available on the service. Previously, indie devs had to convince a small group within Valve that a game was worthy of the Steam community. The implicit promise of the Greenlight project was that no matter how weird, indie games would have a chance at making it if enough members bought into the pitch.

It’s possible that Valve’s primary issue is that Seduce Me is about the pursuit of sex (we’ve contacted Valve to determine the specifics about the removal of Seduce Me, but we’ve yet to hear back about these details). The company is well within its rights to block anything it doesn’t think is in its best interests, but this comes off as a bit unfair. It’s difficult to find an audience on PC without also having a place on Steam, and Seduce Me won’t have that opportunity because some unseen process declared it to be offensive.

If nothing else, this incident is an example of how inadequate the word “offensive” is. Everything is offensive to someone. If Valve truly wished to keep offensive content off Steam, then Steam would have no content.

“Having read a few of those books — one of my friends at high school used to sneak them out from under her mother’s bed for us — I hope that the biggest difference is that people think our writing is better,” Bellard said.

Seduce Me will be available in November on the game’s official website.