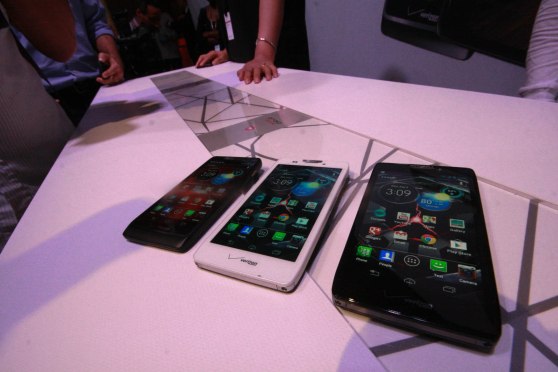 So says newly minted Motorola CEO Dennis Woodside, who today helped unveil the latest trio of Motorola smartphones — the Droid Razr HD, the Razr Maxx HD, and the Razr M. The three Kevlar-backed phones are the biggest push from Motorola since Google acquired it earlier this year. And they might just be the most interesting part of this push.

During the press event today, Woodside laid out Motorola’s new strategy in three parts: One, of course, is speed. “We believe that faster is fundamentally better,” Woodside said, noting that Motorola understands 4G LTE better than anyone else.

This is clear from the new phones, all of which exclusively run on Verizon’s 4G LTE network. Clearly, Motorola is going all-out on LTE.

As a result, Motorola is also making sure that its phones feature beefy batteries “Most 4G smartphones simply can’t make it through the day on a single charge. We think that’s a horrible consumer experience,” Woodside said.

To fix this concern, Motorola gave the Razr Maxx HD a battery that offers 32 hours of life on normal use. This was the original Razr Maxx’s most enticing feature, and one that other phone manufacturers would be smart to replicate.

Today’s Motorola announcements have one notable downside: Though Motorola and Google are now one and the same,  Motorola’s new devices will ship with the Ice Cream Sandwich version of the Android OS, not Jelly Bean. While Motorola does plan to upgrade the devices before the end of the year, it’s too bad that the company isn’t going all out with the most updated version of Android from the start.

And then there’s the issue of price. Though Motorola didn’t divulge the pricing on the Droid Razr HD or the Razr Maxx HD, it’s fair to assume that the phones will be priced in line with previous devices — $199 and $299, respectively. This gives Motorola and Verizon three tiers of consumer offerings: The Razr M will target the budget-minded, while the Razr Maxx HD will attract the attention of those who want the best possible Razr experience. The Droid Razr HD will sit in the middle of the two.

In all, its clear that Motorola has found a design philosophy that’s attractive, functional, and all its own. We’re eager to spend more time with the new set of devices.