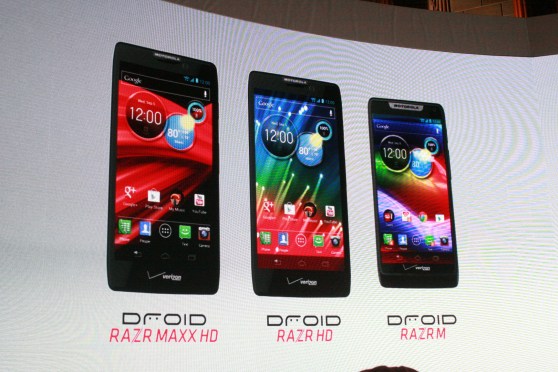 First up was the Razr HD, a device that’s been rumored for months now.

Razr HD’s central feature is its 4.7-inch high-definition display, which will be joined by a 1.5 GHz Snapdragon S4 processor and 1GB RAM. As expected, the device comes with an LTE radio built in, though Motorola made the surprising decision to ship it with Android Ice Cream Sandwich, not Jelly Bean.

Motorola also unveiled the Droid Razr M, a mid-range device that was leaked in August. While largely similar to its more expensive counterparts, the Droid Razr M is meant to be Verizon’s answer to Sprint’s Photon Q 4G LTE. The device, which will be in stores next week, retails for $99.

“We believe customers expect value from our partnership with Verizon,” Verizon vice president Tami Erwin said about about the Razr M.

Wednesday has been a big day for device announcements, with Nokia unveiling a pair of Lumia devices at an event in New York City this morning.

We’ll have a hands-on with the new devices in the coming hour.