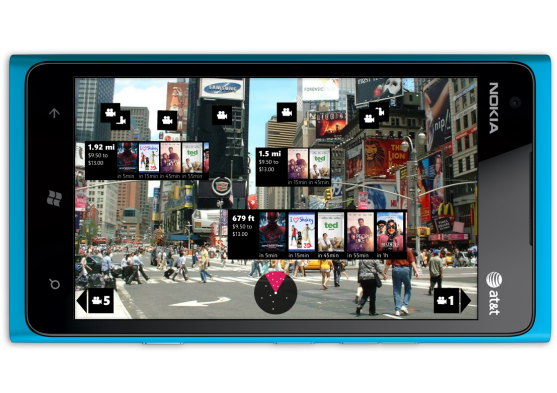 To prove how serious it is about the success of its latest Lumia devices, Nokia is jumping in bed with AOL.

Built with discovery in mind, the app’s linked interface allows users to explore connections between content without the need to launch another app. (That’s the “hub” part.)

More interesting, however, is the app’s augmented reality feature (pictured above), which overlays movie theater locations and screening times onto a user’s surroundings. (Sadly, we haven’t yet been able to try out the feature, but we’re hoping it’s as interesting as it sounds.)

As for Nokia’s strategy with the move, Entrance by AOL is meant as an added incentive for users to pick up the next crop of Lumia devices. For AOL, the app is an “entrance” into AOL’s stable of content, which is sure to get a lot of screen time among new Lumia owners.

We’ll have more in-depth impressions of the app in our coverage of this morning’s Nokia event in New York City.