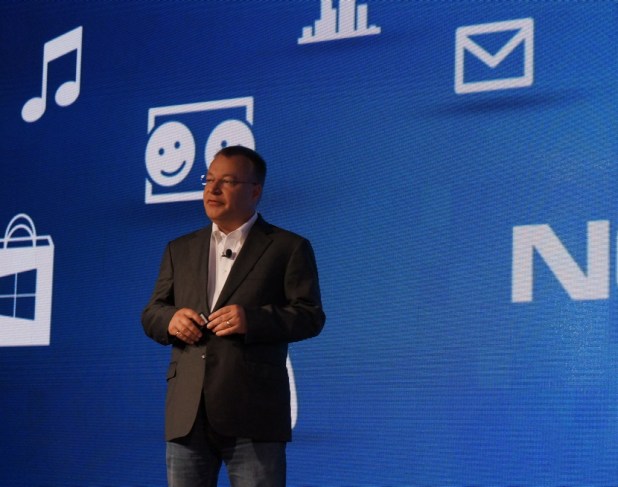 NEW YORK CITY — It’s been almost a year and a half since Microsoft and Nokia announced their controversial partnership, and while the union hasn’t been completely successful, it has inarguably led to the most interesting Windows Phone devices in Nokia’s Lumia line.

Today, Nokia is launching the Windows Phone 8-powered Lumia 920 and 820. They’re bigger, more powerful, and more refined than Nokia’s last Lumia phones, according to last week’s leaked information. But as impressive as they seem at first glance, they leave a couple of key questions unanswered. Can Nokia and Microsoft make up for their mistakes with the Lumia 900, which left early adopters stuck on Windows Phone 7 (albeit, a slightly upgraded version)? And most importantly, can Nokia pry consumer attention away from the endlessly hyped iPhone 5 and the plethora of geek-friendly Android competitors?

One thing is abundantly clear to me today: Nokia can’t just impress us, it has to convince us.

On stage today, Nokia’s president and CEO Stephen Elop (above) reiterated the mantra that the Lumia 800 was the “first real Windows Phone.” He boasted of the awards Nokia’s Windows Phones have won and how the company helped lower phone prices and bring the platform to China (which is growing to be the largest Windows Phone market), India, and other countries.

“Across all of our strategy, we said Nokia would differentiate, we said we would create a very distnctive Nokia experience,” Elop said. 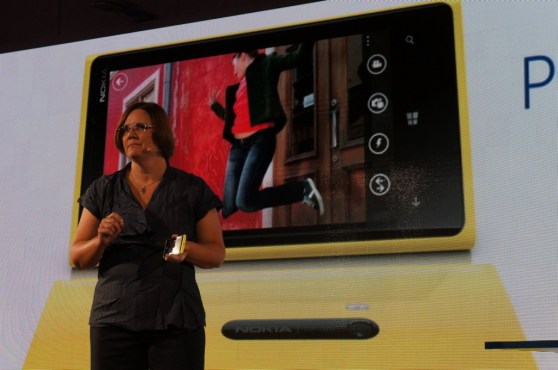 Jo Harlow, executive vice president at Nokia, finally showed us what we were all waiting for: the new 4.5-inch Lumia 920 (in yellow, of all colors). A loud presentation gave the phone a dramatic entrance, though a failure with a sound system took away from some of the impact.

She talked up the phone’s PureView camera technology, which first appeared on the PureView 808. Don’t hold your breath for the 808’s 41 megapixel shooter, but other aspects of PureView technology will allow the 920’s camera to perform better in low light.

The Lumia 920’s camera captures five to ten-times as much light as other smartphone cameras, Harlow said. That’s because it sports floating lens technology, which she says works better than optical image stabilization in most DSLRs.

“The technology reacts to minute movements in your hands to balance the lens, so the shutter can stay open longer,” Harlow said.

She moved on to chat about the Lumia 920’s location features. The phone sports true offline maps, not just offline caching. A new Nokia City Lens feature gives you augmented reality capabilities: Simply hold the Lumia 920 up to any street, and you’ll see the names of restaurants, shops, and the like on your screen.

The Lumia 920 features Nokia’s best display yet, the PureMotion HD+. Harlow boasts that it has “better than HD resolution,” and a fast refresh rate to keep things moving smoothly on the screen. The display is so bright, you can even view it in the desert, Harlow said.

Nokia’s latest flagship is powered by a dual-core Snapdragon S4 processor, which Harlow notes is faster and more energy efficient than some quad-core processors. (We’ve seen the Snapdragon on some of the best Android phones released this year.) As expected, the Lumia 920 also features wireless charging capabilities. Harlow showed off a Fatboy wireless charger. 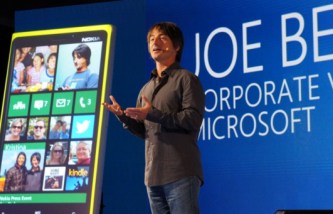 Microsoft corporate vice president Joe Belfiore hit the stage next to remind us of the improvements in Windows Phone 8. He showed us just how personalized you can make the new start screen by including instant updates from your closest friends and family and using an extra-large CNN tile to keep up with news.

Belfiore briefly showed off a new Windows Phone 8 feature: screenshots. Now you can easily snap a screenshot from anywhere in the OS and share it with your friends.

We also got to see the revamped Windows Phone 8 camera, which now supports zooming through pinching, as well as a variety of new photo apps from third-parties (like CNN iReport and Bing Vision). Intriguingly, Microsoft has included a filter for its panoramic picture technology, Photosynth.

Kevin Shields, senior vice president at Nokia, gave us more details on what makes the Lumia 920 tick. Its “construction is even sturdier, the glass is even stronger [than past Lumias],” Shields said. “No squeeks, no cracks, certainly not a phone falling apart in your hand.” (That sounds like a dig against many Android phones, which don’t typically handle wear and tear well.)

He showed off some of the intriguing capabilities of the Lumia 920’s PureView camera. The 920 can capture incredibly stable video, and take night shots that are practically impossible for other smartphones, all thanks to its floating lens.

An hour after the launch event started, Shields finally showed off the Lumia 820, a 4.3-inch smartphone that serves as a more streamlined alternative to the 920. The phone doesn’t feature the same unibody design as the Lumia 920, but you can replace the colors of the rear covers to your liking. One set of the Lumia 820’s covers includes wireless charging capabilities. 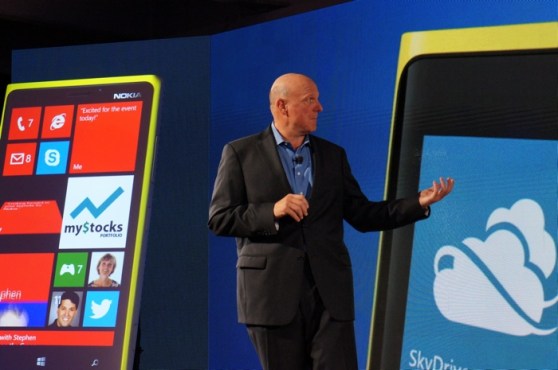 Bringing up the tail-end of the event, Microsoft CEO Steve Ballmer hit the stage to talk up the future ecosystem made possible by upcoming Windows Phone 8 and Windows 8 devices.

“Perhaps more importantly than anything else, we bring a developer platform and a store that’s common to both Windows 8 and Windows Phone 8,” Ballmer said. He noted that Microsoft has worked hard to standardize its platform, as well as help developers build and monetize their apps.

“In one year from now we should see close to 400 million new devices running those operating systems,” Ballmer said, referring to devices running both its new mobile and desktop OS. “That means Lumia … that means Surface … devices introduced in Berlin last week … those devices I’m quite sure represents the largest single opportunity for developers today.”

Sadly, Nokia didn’t have any release details to share about its new devices yet. In a Q&A session after the event, Elop said that more details will be revealed in the fourth quarter. Unfortunately for Nokia, this leaves a huge opening for potential fans to opt for the iPhone 5 instead.

As for making Windows 8 and Windows RT tablets, Elop didn’t have much to say, but he noted that “it’s a real opportunity, though.”