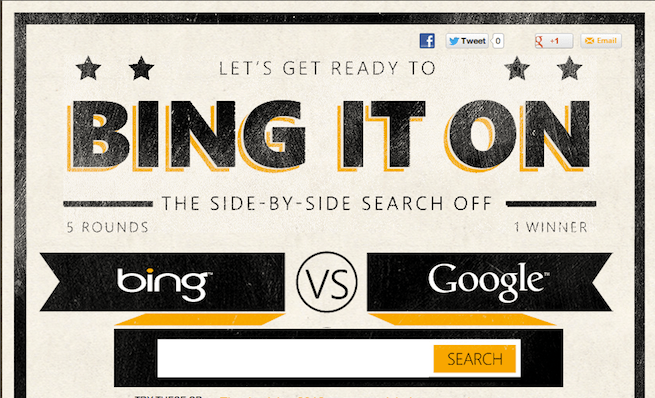 Bing wants to see an end to the term “Google it,” used synonymously with search. Tired of playing second fiddle for years, the Microsoft-owned search company is saying, “Bing it on, Google.”

Today, Bing invites its biggest rival to a search-by-search challenges the likes of which we haven’t seen since since the desktop wars.

Above: A blind side-by-side web search. Google or Bing?

Bing is far less popular than Google, despite its far superior social integration and good reviews. Spokespeople from Bing told us they were inspired to throw their hat in the ring when an independent study (via a research firm called Answers Research) commissioned by Microsoft showed people choosing Bing search results over Google nearly 2-to-1 in blind comparison tests.

For Lisa Gurry, Bing’s Senior Director, this is a way for users to “kick the Google habit.” According to Bing, it’s not just a publicity tactic. “This is an important moment for Bing to invite customers to compare, and we feel a conversation about search quality is long overdue.”

To even the playing field, the results are based on a comparison of web search results. They exclude ads, Bing’s Snapshot and Social Search panes, and Google’s Knowledge Graph.

While it’s great to see tech companies have a sense of humor, would the results of this challenge sway you to change the way you search? So, Google or Bing? Bing or Google? What will it be, folks?