Not so long ago, a city-building simulation game like the Anno series was a pricey disc-based game that was out of the reach of a lot of players who didn’t have a good PC. But now Ubisoft is unveiling Anno Online as a browser-based free-to-play online strategy simulation game on the PC. It’s one of a number of games that’s raising the bar for what is possible with today’s better online technology and alternative business models. 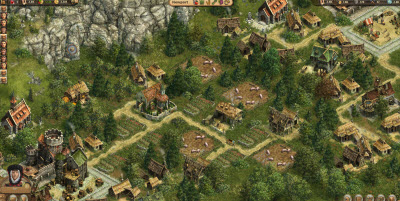 As you can tell from the screenshots, this is a beautiful game in an immersive 3D world set in the middle ages. The game requires no download, but it has high-quality graphics that let you inspect the details up close and observe the ambient life of your city. This kind of city-building simulation puts social games such as Zynga’s CityVille or Electronic Arts’ SimCity Social to shame. The game is programmed in Adobe’s Flash 11 format, which allows browser-based games to take advantage of 3D graphics hardware in a computer. But while Anno Online looks beautiful, it remains to be seen just how playable it will be. Ubisoft says the experience on the browser will be equivalent to that of a retail disc-based game.

The company showed off a video demo of what the game will look like when it debuts this fall. You start building your city on an island with a small population of workers and farmers. You can build wooden farmhouses and select your crops. As harvests come in, you earn income that allows you to build more. You eventually come to manage a whole city, and then you can start building a fleet of merchant and colonization ships. 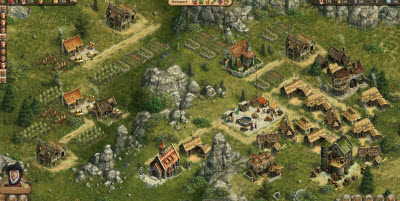 At some point, you can branch out and establish new colonies on new islands. The island you start with is pretty large, with lots of trees, fields, shoreline,  and mountains.

Each large city can have as many as 1,500 buildings, and there are more than 200 different-looking buildings that you can create. You can set your workers on long-term projects such as castles, cathedrals, harbors or other monumental buildings. You can have 10,000 decorative objects per island. You have to build your ships in the harbor, always keeping a careful eye on the resources you have. On the ocean, you can rent ships, create sea lanes, and watch as your trade routes grow.

As you build, you unlock new capabilities and face new challenges as your population grows. The people behave in a dynamic way. If you see them marching and holding up signs, it’s a good bet they aren’t very happy and want you to do something. You have to create enough farms and mines in order to keep resources flowing into the technology. Once you create markets or churches, you have to upgrade them over time to keep up with the growth.

Players can specialize in a particular kind of economy. Your city can also become part of a giant empire as you join with other players in creating guilds. Those guilds can participate in worldwide quests. You can visit other players’ cities and help them grow. You’ll have a chat function and friends’ list. And you need the help of your friends to deliver resources for big projects such as completing a monument. You can create your own avatar character. The game will be available on Windows, the Mac and Linux.