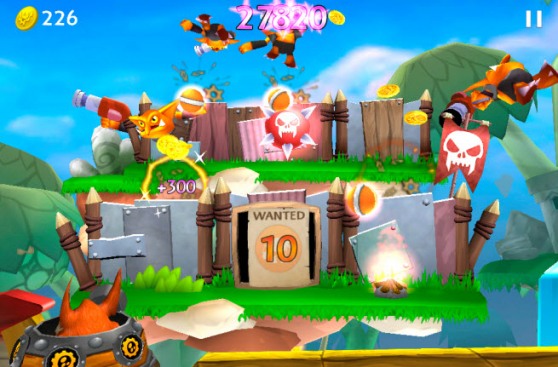 Amazon’s Kindle isn’t just for eBooks anymore. Increasingly, it’s about electronic games. Amazon’s new Kindle Fire HD tablet is getting praise from game companies, including the biggest one of all. Activision Publishing, a division of Activision Blizzard, is making its Skylanders Cloud Patrol game available for the Kindle Fire platform.

Santa Monica, Calif.-based Activision Blizzard sees the potential of mobile games and it launched its first freemium game (the iOS version of the Skylanders title) in April. It has also set up Activision Mobile Publishing as a publisher of third-party games created by outside developers. The Skylanders property is a true transmedia franchise — one that crosses various media types — as a top-selling console game and toy collection. Skylanders Spyro’s Adventure was the No. 1 seller for the first six months of 2012 in the U.S. and Europe, if you count accessory and toy sales, said John Coyne, consumer marketing vice president at Activision.

“We are thrilled to team up with Amazon to now bring the franchise to millions of Kindle Fire users,” Coyne said.

The Kindle Fire version will have an exclusive feature where players will be able to purchase toys from within the Skylanders Cloud Patrol game app, with just the push of a button. The always-logged-in Kindle Fire will buy the physical toy via an in-app purchase and unlock the digital character via Amazon’s 1-click purchasing. Then the physical toy will be shipped to the user. In Skylanders Cloud Patrol, the evil minions of Portal Master Kaos have overrun a region of Skylands. Players can use any of the 30 Skylanders characters to fight the bad guys. The player interacts with the game using touch gestures. The game will sell for 99 cents at launch and is dubbed “freemium” because it offers unlockable digital content.

Back in June, Activision’s mobile chief Greg Canessa told us that his company’s entry into mobile and its alliance with analytics firm Flurry were strategic moves.

“Our company is a thoughtful one,” Canessa said. “We aren’t one to promise the world and chase after it for years. We are thoughtful on how we enter new spaces, and our partnership with Flurry is a key component here.”

He added, “We are increasing our involvement in mobile and the microtransactions, games-as-a-service business model. This marrying up with Flurry is an indication of our increased investment. We’re going to find titles with a lot of potential and publish them.”

And today, Canessa said that Activision had a deep partnership with Amazon on the Kindle Fire relationship, mainly because it believes that the shift to mobile is becoming more and more important and Amazon has clearly demonstrated its commitment to the mobile gaming ecosystem.

“We have a leadership position in the video game space and they are a leader in digital commerce,” Canessa said. “It’s a great marriage. We are not the first to the party with mobile. But you this through our actions that we are making a dedicated effort with mobile. We see a huge opportunity around Amazon.”

Canessa said the iOS Skylanders game has had well over a million downloads. And all four of Activision’s major mobile game releases — Skylanders, Wipeout, Pitfall, and Call of Duty: Zombies — have made it into the top three paid apps rankings.

Atul Bagga, an analyst for Lazard Capital Markets, said in a research note today, “We believe we are seeing just the early chapters of a transformational story from a pure ecommerce player to a digital media platform. We believe Amazon has three competitive advantages that will allow it to compete in, and potentially dominate, digital media platforms: 1) trust; 2) technology; and 3) payment infrastructure.” He also said the company has highlighted strong ecosystems for digital media around the Kindle platform.