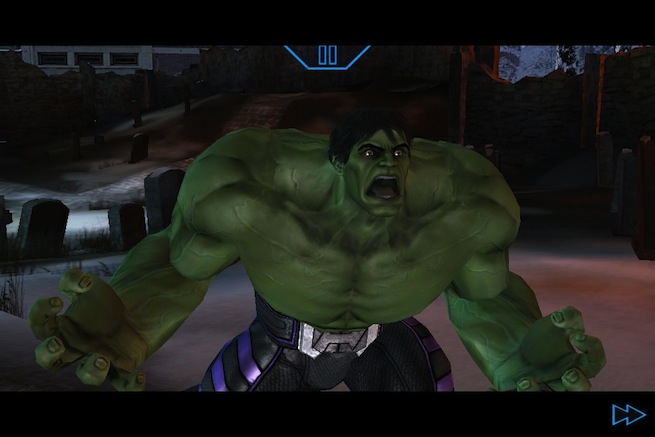 Avengers Initiative marks a new era of games based on Marvel Comics’ iconic brand of superheroes. Taking place in the same universe as the Avengers Alliance Facebook title, the episodic mobile series is a part of the company’s aggressive “push for quality.”

Heavily inspired by Chair Entertainment’s Infinity Blade, both in terms of one-on-one combat and branching exploration, the first chapter in Avengers Initiative features the Hulk, the always angry Mr. Hyde to Dr. Bruce Banner’s mild-mannered Jekyll. Unfortunately, not even the green-skinned hero is big enough to save this first chapter from mediocrity.

Just don’t tell him I said that.

Strategic combat
Despite the lack of movement in battle — you can only move from side to side — the Hulk has a ton of combat options at his disposal. In particular, counterattacks are plentiful if you time your dodges or blocks accordingly. Some of these counters, and a few of your energy-sapping special moves, involve rapidly tapping the screen to power it up. Other times, you have to swipe in specific directions. The fighting mechanics do a good job of keeping you on your toes.

The same can be said when it comes to customizing your specific kind of Hulk. Stats are broken down into four categories — Health, Damage, Stamina, and Rage — where you can spend your experience points. If you want to block more, dump points into Stamina. Want to perform more special attacks? Spend it all on Rage.

Special shards made from Isotope 8, a mysterious element found in the shared universe from Initiative and Alliance, also serve to augment your stats when equipped. And costume pieces, used to customize the look of your Hulk, have specific bonuses as well. So if you micromanage enough, you can shape the Hulk to whatever play style you prefer.

Obsessive attention to detail
From the Hulk’s bulging veins to the characteristic chin wrinkles of the shape-shifting alien menace known as the Skrulls, everything in Avengers Initiative is painstakingly crafted down to the tiniest detail. The Hulk walks with the right amount of heft, and the animations in battle look smooth and natural. The cinematic finishing moves are a lot of fun to watch, as they let the Hulk do what he does best: smash his enemies.

Distinct level variety, whether its the dilapidated ruins of a town or the abandoned wreckage of a military airship, makes this chapter appear far bigger in scale than it actually is — an experience that amounts to three or four hours. If this is the kind of quality we can expect for future releases, I’m all for it. 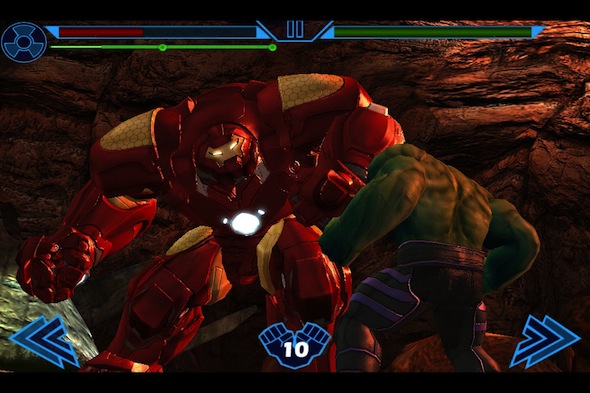 Flat storytelling
When GamesBeat first saw Avengers Initiative in action, the developers promised that we’d see “full character arcs” for each chapter. But nothing really happens with the Hulk. You’re sent to clean up a few bad guys here and there until you reach the inevitable cliffhanger ending. Radio transmissions to and from Nick Fury, the head honcho behind the S.H.I.E.L.D. espionage agency helping the Avengers, provide some insight to what’s going on, but these don’t lead to a coherent narrative.

A sharp difficulty curve
Sometimes, the difference between life and death in Avengers Initiative is not a matter of skill. A few of the villains are simply too powerful to take on in your first run through, and they can knock you out in one or two hits. This normally wouldn’t be a problem; except that when you die and run out of continues, you must start over from the beginning of the game.

This is yet another design decision borrowed from Infinity Blade where you play the game again and again with all the stats and powers you previously earned. However, what felt like a learning experience in Chair’s release — which also had more paths and areas to explore to alleviate the repetition — feels cheap and frustrating here. I grew so impatient with one enemy that I spent $0.99 to buy 10,000 of the purple ISO-8s (the in-game currency) so I could stock up on a few more health packs for the battle. And it worked.

I usually avoid spending money on in-app purchases whenever I can, but I sure as hell did not want to grind for a few more hours against the same type of enemies just to beat this one guy.

It walks like the Hulk. It roars like the Hulk. But it doesn’t feel like the Hulk.
Despite the many ways I pummeled, kicked, or crippled my foes, I never felt like I was playing the same badass Hulk seen in comic books or films. My issue with this came down to the sound effects. Every punch the Hulk throws sounds like he’s smacking a piece of cardboard around. A complete lack of impact or momentum behind these attacks immediately breaks the immersion.

Due to a few design issues, Avengers Initiative doesn’t quite start out with the bang that developer Wideload Games probably hoped for. But with solid combat and production values, and the diverse fighting styles of the other Avengers, the future is potentially bright for this episodic series.

Avengers Initiative is now available for iOS (iPhone 4, 4S, iPad 2, the new iPad) and select Android devices. The publisher provided GamesBeat with a download code for the purpose of this review. I built my Hulk up to level 22, beating the campaign multiple times on an iPhone 4S.