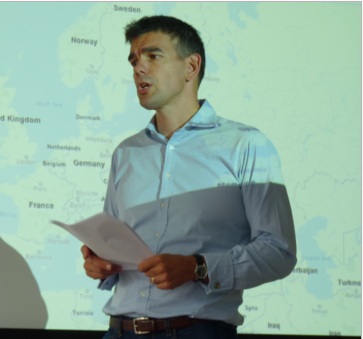 Google’s European chief Matt Brittin has described a new proposed copyright law in Germany as “like putting up a big sign saying ‘we don’t understand the Internet’.”

The “ancillary copyright” law, in its draft form, would make search engines, including Google, pay for reproducing newspapers’ headlines and first paragraphs in search results.

“I’m concerned about it, not just as somebody who’s passionate about the Internet but also as a former newspaper publisher myself,” Brittin – Google’s VP for central and northern Europe and an ex-director at Trinity Mirror – said, speaking at Google’s office in Berlin.

He pointed out the clear value for businesses in adding online marketing (“four to eight times faster” growth) and estimated the size of the Internet economy – infrastructure, devices, access payments, and Internet-based transactions – at three to four percent of GDP in Europe. “It’s estimated it’ll be about 12 percent of European GDP by 2016.”

Newspaper publishers would seem to be the big losers as businesses’ marketing spend migrates to search engine optimization (SEO) and management (SEM) – with advertising through initiatives such as AdWords making up 96 percent of Google’s $37.9 billion revenue in 2011. Would Brittin agree this shift cuts resources available for journalism – justifying the bid to claw some back in Germany?

“We’re going through a big structural shift [in] how information is shared and produced,” he told VentureBeat syndication partner VentureVillage. “I don’t remember the stats for Germany offhand. … In Austria, 50 percent of advertising spending is on newspapers, I think – it’s about 10 percent of people’s time spent on newspapers, so this is an unsustainable thing.”

His advice for newspaper publishers and other vertically-integrated media companies is to pick what they do best and make the most of new ways to connect with readers online:

I was talking to the editor of the Guardian in the UK – he said that in the early 1960s, I think it was, they had 652 overseas readers. They now have 30 million. … They probably won’t make as much money per reader as they used to when they basically controlled the entire public sector jobs ad market, but that seems like a big opportunity and that’s how we’d like it to work.”

Google News and Search sends about four billion clicks per month to publishers’ websites, he said – with the implication that limiting that isn’t the best fix for the wider problem.

As for Google, arguably approaching monopoly status itself, Brittin was confident initiatives such as the Data Liberation Front, to help users switch to non-Google products, will keep the company honest. “You can Google for other search engines.”

Anyway, it’s not the likes of Yahoo the company is worried about. “It’s people like them”, Brittin said. “It’s two guys in a garage or, hopefully, two women in a Berlin startup unit – it’s the people who come up with something none of us have ever thought of.”

Brittin spoke in Berlin on Friday as part of the M100 Sansoucci Colloquium, part of Medianwoche @ IFA 2012.