Intel is about to talk up its progress in making chips for smartphones and tablets at its Intel Developer Forum this week. But its archrival, ARM, has preemptively argued that it continues to dominate the market for processors for mobile devices based on the strength of its partner ecosystem.

ARM has had the inside track on mobile devices because it started with a chip architecture designed for low power use from the start, compared to Intel’s approach of trying to redesign computer chips so that they can operate on a lower amount of power, said James Bruce, a lead mobile strategist at ARM, in an interview with VentureBeat. As the market shifts from low-performance, low-power mobile devices to smartphones and tablets — which feature high performance and low power — ARM and its partners continues to win the bulk of designs, Bruce said. ARM is a designer of chip architecture, and its partners take those blueprints, modify them to their own needs, and fabricate chips for use in mobile devices.

Now even the entry-level devices in both phones and tablets are requiring better processing capabilities and faster connectivity. Intel, which is banking on getting chips into at least 20 upcoming Windows 8 tablets, argues that this change in the market will favor its own heritage of high-performance computing. But ARM says chips based on its technology are still undercutting Intel on power usage and are hitting the lowest price points in the market at the same time. For instance, a new Lenovo phone with a high-end ARM Cortex A9 processor with Mali 3D graphics now sells for just $75. Samsung recently introduced a digital camera with the Android operating system and connectivity. 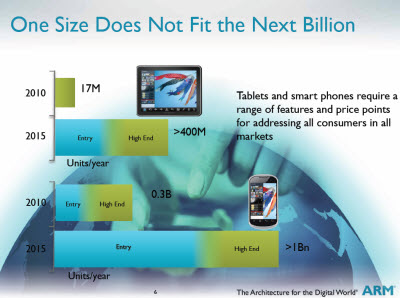 ARM partners have launched a number of system-on-chip solutions to do battle with Intel. Those partners include Spreadtrum, Qualcomm, Broadcom, Mediatek, Samsung, Nvidia, and Texas Instruments. If you count Apple as well — another ARM licensee — those chip makers have the mobile market covered from top to bottom, from single-core to quad-core solutions. Chip manufacturers such as Taiwan Semiconductor Manufacturing Co., Samsung, and Global Foundries are investing heavily to keep up with Intel in manufacturing chips that can deliver on both performance and low power. Mobile operating systems, meanwhile, are advancing quickly with a one-year innovation cycle and are driving improvements in software efficiency and distribution.

ARM believes that tablets could be shipping about 400 million units a year by 2015, compared with just 17 million units in 2010. By comparison, the number of smartphones shipping in 2015 is expected to top 1 billion units, compared to 300 million in 2010. Smartphones are now outselling feature phones in many markets, and they are the prime generators of Internet connections.

“Your smartphone is now your primary computing device,” Bruce said. “It gives you access to your digital life in places where you don’t want to carry your laptop.”

During the past five years, the user experience has improved with the rise of app stores, connectivity to the cloud (rather than the PC), the introduction of full web support, and multitasking. Mobile devices are becoming hubs for your digital content. They’re contextually aware, offering information on your surroundings. They’re becoming platforms for digital identity and payments. Smartphones are getting connected to different devices around the home, such as computer displays and TVs. 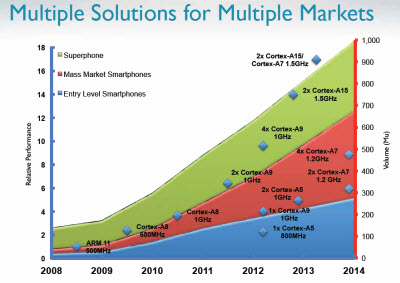 By 2013, ARM-based solutions for entry-level smartphones will cross over 1-gigahertz in performance, Bruce said, while the high-end ARM chips will top 1.5 gigahertiz with multiple cores. New Arm Cortex A15-based chips are coming out in the next year. Texas Instruments and Samsung have announced A15 devices on their roadmaps.

“You’ll see a doubling in performance over the next couple of years,” Bruce said.

Applied Micro Circuits Corp. (AMCC) is developing a high-end 64-bit ARM-based X-Gene server microprocessor. The chip has been under way for some time and it packs energy-efficient dual cores. AMCC hopes to launch the chip in the second half of 2012. If it delivers on that product, then it will challenge Intel’s multibillion-dollar stronghold in data center computing. The question is whether it can keep pace with Intel’s own server chip schedule. But a chip like this shows that ARM can cover everything in the computing spectrum.