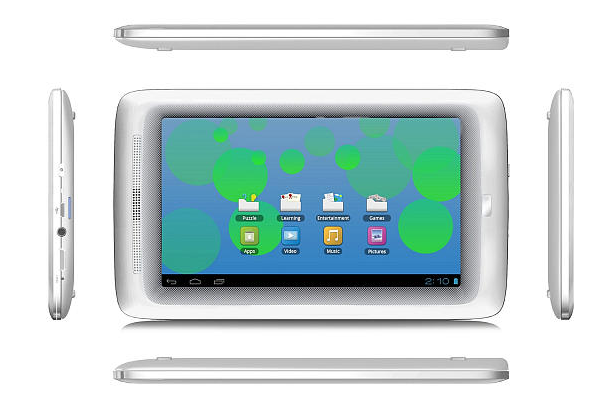 If Amazon can create its own tablet, why not Toys ‘R’ Us?

The toy retailer takes a stand against online competitors with the Tabeo, a $149 Android 4.0 tablet that it hopes catches the attention of kiddies.

Created by and available solely at Toys ‘R’ Us, the Tabeo comes with 50 games, including beloved apps Angry Birds and Cut The Rope. Built-in parental controls limit what kids can do on the tablet and how much time young ones use it. (Amazon recently announced similar controls in its latest Kindle Fire tablets.)

The jump into tablets comes as Toys ‘R’ Us faces two big existential challenges: On the retailer end, online outlets are scooping up customers, making Toys ‘R’ Us (and Best Buy) basically showrooms for companies like Amazon.

And the kids aren’t helping, either. Young ones are increasingly turning to gizmos and video games for their entertainment, making it a bit tougher for toy makers and toy retailers to do business. Aiming to remain relevant, Toys ‘R’ Us wants to get ahead of what kids are interested in. Hence the Tabeo.

But while the company is a bit late to the kids tablet market, devices like the LeapPad Explorer haven’t attracted a critical mass of attention quite yet. The reason? Parents have so far been pretty content with letting their kids use their own Kindle Fires and iPads.

That’s a big hurdle that kids tablet makers are going to have to overcome if they want to carve out a niche for themselves in the tablet market. Perhaps it’s Toys ‘R’ Us  that has the best chance of doing just that.