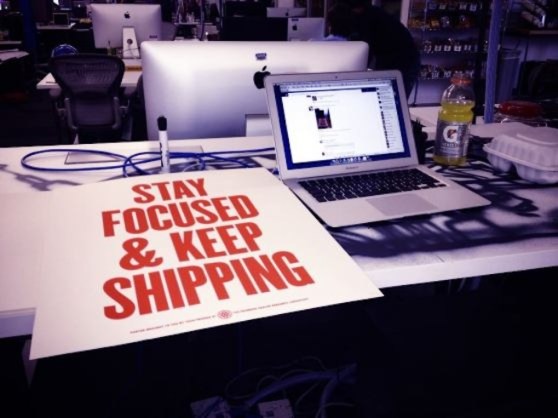 In Mark Zuckerberg’s eyes, the Facebook phone might not make sense for his company, but search we can actually expect.

Around the time Facebook announced that it was going public, Zuckerberg uploaded a photo of his desk to, what else, his Facebook Timeline. On his desk was a big poster that read, “Stay focused, and keep shipping.” But the only part of the photo people could focus on was a tiny white bar at the top of a Facebook page open on his laptop. The bar, everyone assumed, was “Facebook search.”

“There’s a big opportunity there and we just need to go do that,” said Zuckerberg at the TechCrunch Disrupt conference in San Francisco today. “That would be one obvious thing that we’d want to do in the future.”

Since the company went public in May, its stock has been on the recent decline and a number of big investors are dropping their shares. People criticize the company for not having a good-enough business model, that social gaming isn’t bringing in enough cash, and that there needs to be innovation in advertising. That’s exactly what search can take care of for Facebook.

“These are queries that you could potentially do at Facebook…and at some point we’ll do it,” said Zuckerberg. “We have a team at Facebook working on search.”

The product would compete with Google’s Search Plus Your World, Bing with its new social integrations, and probably even question and answer website Quora to a degree.

The most important competitor, however, is Google AdWords. Facebook search opens up a new advertising opportunity for the company, that is search is made into its own entity — not just a drop down box over your profile, but a whole separate page. Facebook could serve adds that are targeted more than extremely well to people’s interests based on their queries, interests, likes, fan pages, friends’ interests, and more.

Sure, the social network takes pains to say you own your data, but, as VentureBeat’s Jolie O’Dell puts it, if you aren’t paying for the product, you are the product.