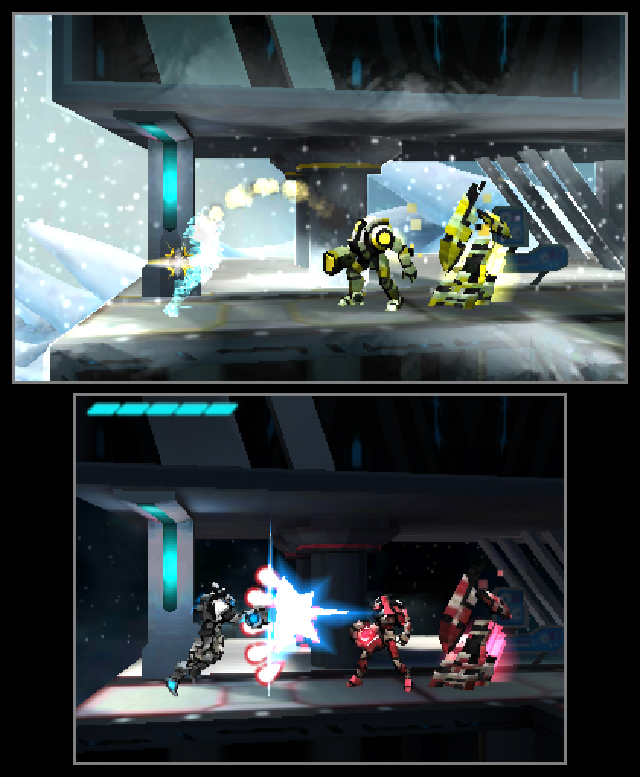 If I hadn’t reviewed Fractured Soul, I doubt I would have heard of it. Even if I did, I don’t know if I would have bothered giving it a try, especially with the busy holiday season of gaming looming close by.

Luckily, I did review Fractured Soul, and I discovered a clever, fun, and challenging Nintendo 3DS game well worth your time.

Clever
Fractured Soul is essentially a 2D action platformer (think Mega Man) but with a cool twist. You control one character simultaneously across both screens, each depicting nearly identical worlds. You can only truly inhabit one screen at a time, while the game marks your position in the other with an invulnerable silhouette. You can switch between the two by pressing a shoulder button.

So, let’s say that you face a large gap that you have to jump. On the bottom screen it seems impossible to clear, but the top version of the level has a small platform in the middle, so you have to switch to that screen in order to progress. This is a simple example of a versatile mechanic. In later levels, you’ll constantly switch between screens to avoid enemies and traverse perilous worlds.

A good challenge
Having to look at two screens may sound daunting, but it’s wonderfully engaging. You can’t afford to turn your brain off while playing or you’re likely to lose track of where you are…and die. This is a challenging game, but it’s never unfair. You’re never tricked into jumping to your death. Will you become occasionally overwhelmed and leap for a ladder in one world that only exists in the other? Sure. But you learn, and you try again.

Keep your head and learn from your mistakes, you can see it through to the end. Besides, few things top that feeling you get when you know you beat a difficult game.

Adaptive
As cool as the whole switching between screens mechanic is, it would likely get old if it was the only thing Fractured Soul had to offer. Thankfully, the game knows exactly when to switch it up. One set of levels has the world in the upper screen under water, meaning you walk slower but jump higher. Another shifts the gravity from up to down whenever you switch worlds. These aren’t new ideas, but developer Endgame Studios is able to do special things with them by combining these gimmicks with its own. 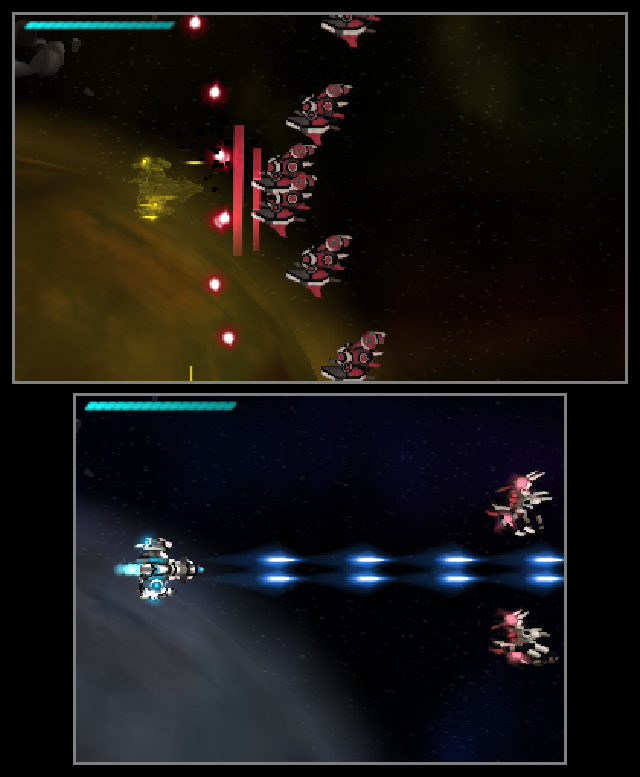 Genres within genres
While most of the game consists of platforming, a few levels inhabit a different genre entirely, namely the space shooter (sometimes called “shooter-’em-up” or “bullet hell” by fans). These sections play a lot like more familiar games, but they also utilize soul-shifting. You switch between screens to avoid enemy fire, and you can fill a depleting life bar only by killing enemies, ensuring that you’re not hiding in one world for too long.

These levels are just as entertaining and clever as the rest, but they sadly only make up a fraction of the game. I suppose it’s better to limit them than have them overstay their welcome, but I wish that developer Endgame Studios found a better balance between the number of platform levels and shooter stages.

Presentation problems
Fractured Soul is fun and smart, but it’s not much of a looker. The characters and levels feel like they could have come from a hundred preexisting sci-fi games.

The story, what little there is, comes in small dialogue boxes between levels, but even this morsel of narrative was impossible to follow. I can honestly say I had no idea what was going on. Mind you, I was usually having too much fun to really care, and it’s clear that story wasn’t a one of the developer’s big concerns. But a little more context would have been nice.

Also, despite being a 3DS game, you can’t play Fractured Soul in 3D, which seems like a bizarre omission. But this never detracts from the gameplay.

I really didn’t know what I was getting into with this one, but even my initial impressions had me wondering if the game was more than its single (though great) gimmick. But in the end, I discovered one of the 3DS’s hidden gems. Don’t make my mistake. Don’t ignore Fractured Soul.

The publisher provided GamesBeat with a downloadable code for the purposes of this review. Fractured Soul is available on the 3DS eShop on September 13.