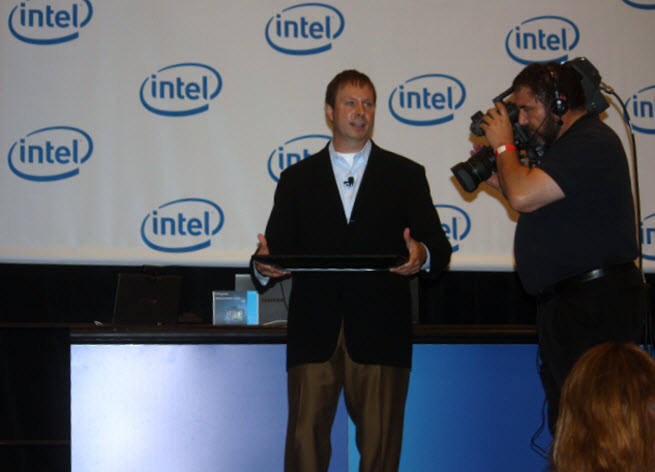 SAN FRANCISCO — Intel showed off a new kind of all-in-one desktop computer that is a lot more mobile than desktops have ever been. 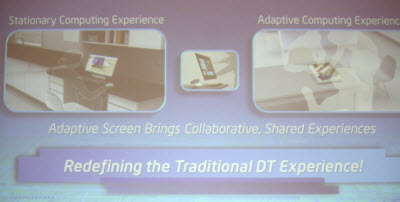 Kirk Skaugen, the head of the PC client business at Intel, said at the company’s Intel Developer Forum today that the “adaptive all-in-one” computers coming this fall can be detached from their stands and used as 20-inch (or larger) tablets. You can also take them to another part of the house and plug them into another stand, or just run them on battery power.

“The lines between the categories are disappearing,” Skaugen said.

A number of computer makers will introduce those big all-in-one computers in the not-so-distant future, Skaugen said. 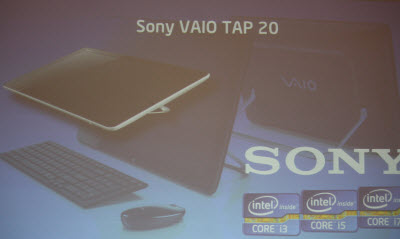 Skaugen said that Sony is calling the concept the “desktap,” and it will have a version called the Sony Vaio Tap 20 (pictured left) adaptive all-in-one computer. All-in-one computers are becoming increasingly popular as replacements for traditional desktop computers because they save space and have fewer wires and components.

Skaugen showed off a demo of the Sony computer (pictured at top) that he unplugged and carried around. He laid it flat and began using it as an artist’s canvas, painting the screen with his fingers. The machine runs the touch-oriented Windows 8 operating system from Microsoft.  Skaugen said the screens will likely have their own batteries and the intelligence in the system will be built into the screens, not the stands.

Kevin Krewell, senior analyst at The Lynley Group, said, “Not all innovation succeeds. They’re experimenting with things. You learn from doing that. The market will decide if it’s successful or not.”

And Martin Reynolds, a vice president at Gartner, said, “That’s a large thing to haul around, kind of like a portable tv set. But how often did you move around your portable TV set?.”