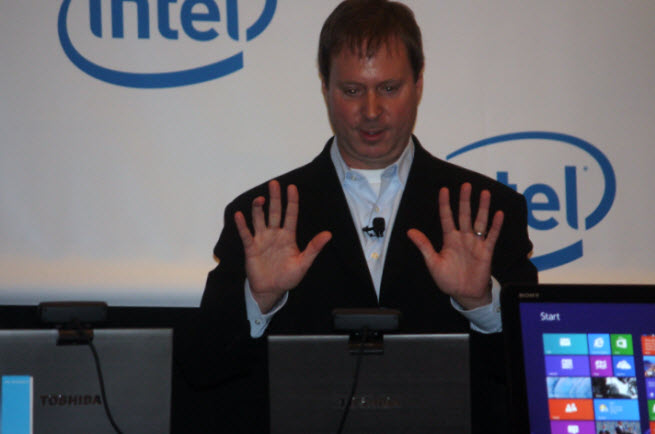 SAN FRANCISCO — Intel executives are excited about the next refresh coming for the PC. Kirk Skaugen, the general manager of the PC Client business at Intel, said today at the Intel Developer Forum in San Francisco that “more innovation [is] coming in the next 18 months on the PC than you’ve seen in a decade. 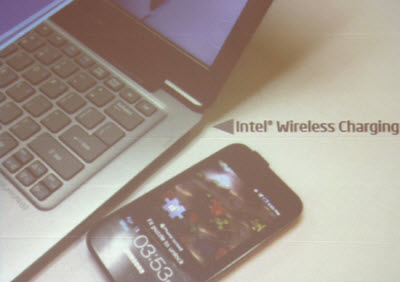 Skaugen, pictured above, said that Intel and IDT have teamed up to produce wireless charging for laptops and PCs, allowing you to charge a device such as a phone (pictured) simply by putting it near a PC.

“Our goal is to eliminate wires from the PC,” Skaugen said.

The refresh is expected to begin on Oct. 26 with the launch of Windows 8, Microsoft’s new touch-oriented operating system, and continue through the next year or so. If it happens as expected, the refresh could generate $200 billion in annual sales for the computer industry.

Kevin Krewell, an analyst at The Lynley Group, said, “A lot of the innovation has to do with the new user interface, with touch, gesture and voice. All of the technologies have been around for a while. We are getting to a critical mass where people are used to touch and voice. The technologies are pervasive around us in things like Apple’s Siri. The PC is a natural place to incorporate those as well.”

He said the moves are clearly driven by concern that the PC is losing ground to tablets and smartphones. “Absolutely,” he said. “The whole platform development of Ultrabooks (thin and powerful laptops) is an attempt to mitigate the damage caused by tablets to the pc infrastructure.” But he doubts people will be excited about convertibles, which incorporate the tablet into a laptop.

Here’s the checklist of innovations coming for the personal computer: