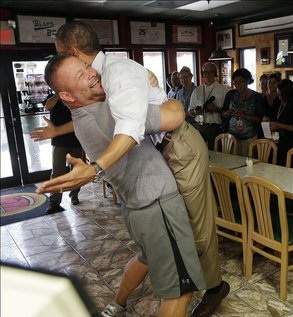 What happens when you bear hug the president? Well, if you’re a business owner, you might get a sudden influx of Yelp reviews.

Since the owner of Big Apple Pizza in Fort Pierce, Fla., bear hugged President Obama over the weekend, he’s seen his reviews spike. Today, he has more than 2,200 reviews. Last week, he had two. (Both five stars.)

The deluge started with one-star reviews from Republicans unhappy that a self-avowed Republican would be enthusiastic about meeting the president, driving down the pizzeria’s ratings.

“There is no way I would eat the pizza from this establishment even if it was free,” one wrote.

“i will only return if/when he pile drives obama into the floor the next chance he has. he is not even close to being a republican,” said another. “besides, his grinning makes me sick and his holding this jerk is sickening too !”

Most of these reviewers lived nowhere near Florida and it was clear that they had never been to the place.

As the Internet often does, it self corrected. The surge of haters was followed up by people who rated Big Apple 5 stars.

“Thought it was the most hilarious pic I seen with the look on Obama’s face,” wrote Ash S. from Huntsville, Ala. “Terrible to see that the place is getting bombarded with juvenile retaliation for liking our president.”

“I am an Independent and want to add my voice of support for your warm gesture towards another human being,” wrote R.M. of Reston, Va. “It is acts of kindness like this that make our world a good place in which to live. If your pizza is as good as you are, more power and success to you!”

What of the automated review filter? It’s supposed to prevent Yelp from being spammed. (Although small businesses complain that Yelp uses the black box to extort them into paying for Yelp’s insanely overpriced advertising. Disclosure: I’m short $YELP.) It has only trapped 150 of them. This despite the fact that many of the reviews look like obvious spam just based on the fact that they’re newly created accounts with no Yelp friends that only review one business.

The reviews (good and bad) seem to violate Yelp’s guidelines. A Yelp spokeswoman pointed me to one relevant guideline:

Relevance: Please make sure your contributions are relevant and appropriate to the forum. For example, reviews aren’t the place for rants about a business’s employment practices, political ideologies, extraordinary circumstances, or other matters that don’t address the core of the consumer experience.

She didn’t address why the review filter did not detect the vast majority of the bogus reviews.

Although this is an extreme example, it illustrates some of the key problems with Yelp:

Even though Yelp has been reasonably successful at collecting reviews and offers much more coverage than newspapers, magazines, and traditional review models, it’s hardly reflective of the population. Based on my analysis of Yelp data for San Francisco, 25% of reviews are written by 1% of Yelp reviewers. And that’s not even counting the fact that most people who visit the site don’t review anything. The best local reviews model will make it easier for people to participate and collect a lot more data.

Based on Yelp’s current market capitalization of $1.54 billion and its 21.6 million reviews at the end of June, the company is worth $71 per review. I don’t know if that number is more or less ridiculous than the $600 CPM (cost per thousand views) that Yelp charges businesses. I do know that it’s a lot more than many businesses take in when Yelpers visit.

In the following slide from a recent CNBC interview I did on Yelp, you can see how the $600 per thousand views advertisers pay Yelp to advertise in its local search results compares to what they’d pay for the same number of views elsewhere or simply in banner ads on the site. (Note that it’s small businesses paying the most here, since they’re the target for ads in the local search results, whereas national advertisers are targeted for the much more affordable banner ads.) 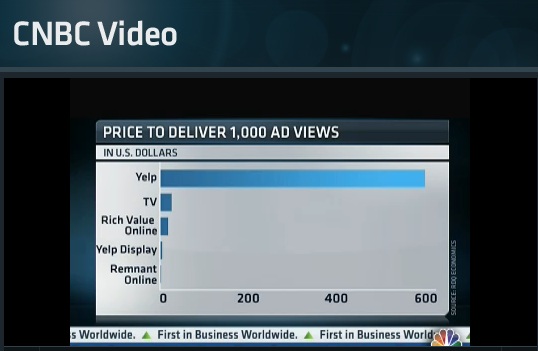