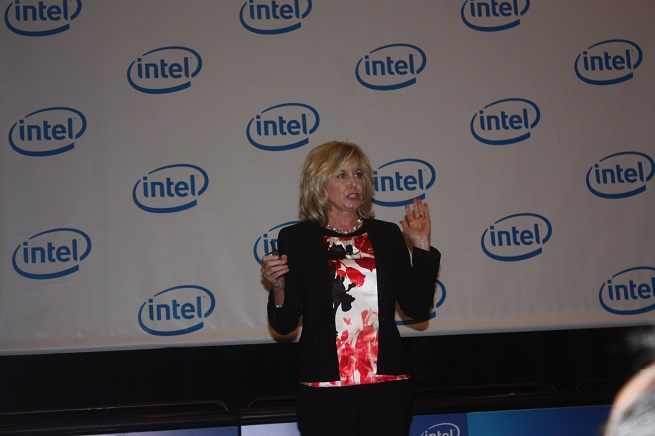 SAN FRANCISCO — When Intel warned about weak third-quarter sales last week, it blamed it on slow consumer and enterprise PC sales. But it said that data center computers known as servers were meeting expectations. The reason is that the explosion of tablets, smartphones, and other mobile devices helps drive demand for servers, said Diane Bryant, the head of data center computing at Intel.

Speaking at the Intel Developer Forum in San Francisco today, Bryant (pictured above) said that for every 120 tablets sold, a server has to exist to handle all of the web-based traffic that their users create. She said that for every 20 digital signs in a shopping mall and other areas, like the flatscreens in your local coffee shop, you need one server. And for every 20 surveillance cameras deployed, you need a server to sort through all of the video data.

Intel is sampling its next-generation E7 and E5 server chips for delivery next year. The low-power server chips are based on Intel’s Ivy Bridge chip designs, which combine graphics and computing on a single chip.

Low-power Xeon E3 series chips arrive in 2013 and are based on the 22-nanometer Haswell core now in development. But a new breed of lower-power Atom-based servers, known as microservers, are also arriving. These microservers have chips with a third of the usual power consumption and they use Intel’s Atom processors. Next year, Intel will launch the 22-nanometer Avoton version of the Atom chip for microservers.

BMW said it will use a new Open Data Center Alliance data center, fueled by geothermal and hydroelectric energy, at a location in Iceland.

On the security front, Bryant said that Intel is embedding Deep Defender security technology into its Xeon server chips. Intel has also launched trusted execution technology for its ecosystem. Intel entered the server chip market in 1997 and has improved performance 10,000 times.

Big data was a $4 billion market last year, Bryant said, and it is growing at 30 percent a year. The data comes from everything, like social networks or radio frequency identification sensors.

Ariel Kelman, head of worldwide marketing at Amazon’s web services division, which hosts web infrastructure for businesses, said that it is working closely with Intel to transform supercomputing from a tool for the elite to something the masses can tap into. Amazon’s Cluster Compute Eight Extra Large Instances are ideal for big data server solutions. They start at $2.40 per hour. You can configure your own top 500 supercomputer with 290 instances at a cost of $73 per hour.

Yelp uses AWS to analyze all of the data from clicks on its online user reviews. NASA uses AWS to calculate telemetry data for the Mars Curiosity rover.

Six Flags uses Intel servers in its amusement parks to monitor crowd traffic via surveillance cameras in its theme parks. It reallocates its staff to the high-traffic areas based on the data from the cameras.