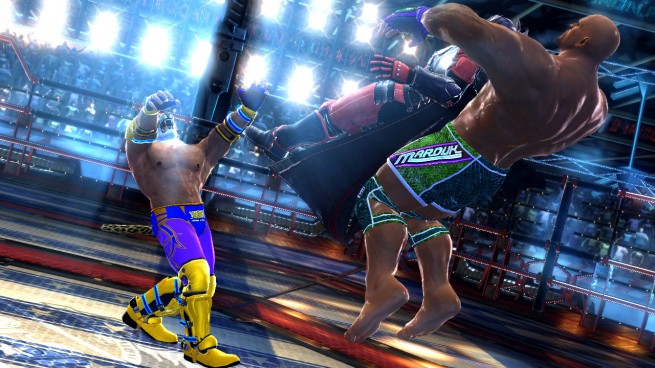 The sequel to 1999’s Tekken Tag Tournament is a noncanonical sidestep in the constant battle that is Namco Bandai’s bare-knuckle 3D fighting franchise. So this 55-combatant (not including downloadable entrants), storyline-cracking free-for-all is technically nothing but an illusive blip on an already convoluted Tekken timeline — and a figment of chief producer Katsuhiro Harada’s already insane imagination.

But after stuffing myself with repeated trips to this buffet of brawls, I’m left wondering if Namco’s more friendly approach is the best direction for the series.

Become the ultimate Don Armor King
In TT2’s fantasy world, you can put on the dream fights you’ve always wanted to see. You have a ridiculously dense (and in some cases, just plain ridiculous) roster of ruffians to rumble with, either solo or in tag teams. The franchise’s warring Mishima and Kazama clans are at your disposal, along with pretty much every other mainstay from Tekkens No. 1 through 6.

Gameplay is as tight as Nina Williams’ outfit
Tekken’s responsive and fast-paced controls are in full effect here. Fights are as frantic and fun as you would expect. The core mechanics introduced in the last Tekken release are back with a tag-team focused twist. Destructible, multitiered environments return, as well, making combat especially dynamic and dangerous.

Fight Lab is a useful, albeit bizarre new addition
Series newcomers and veterans alike can benefit from the Fight Lab. The all-new mode is a glorified tutorial, complete with a wacky storyline featuring Violet, the millionaire philanderer alter ego of playable pugilist Lee Chaolan. As you progress through the Lab’s brief campaign, you’ll help Violet program his prototype Combot. Each chapter highlights a specific gameplay mechanic, culminating with a boss battle. 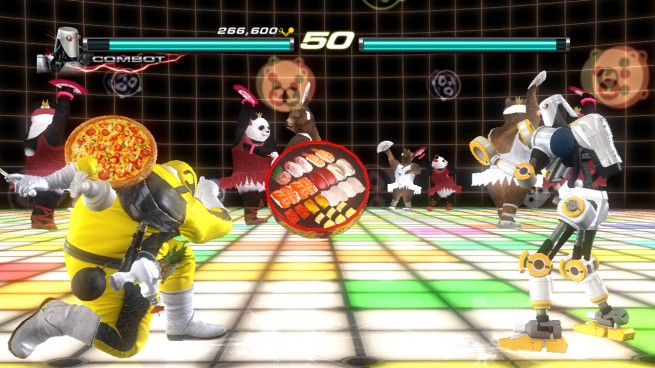 By the end of the experience, you’ll have worked on offensive and defensive basics while learning essential tag-team techniques. And you’ll probably have scratched your head a few times at the completely random narrative interludes. As a bonus, you’ll be able to program the Combot for customized training sessions.

Flying sumo wrestlers are surprisingly charming
The King of Iron Fist Tournament has always had its quirky undertones, and the latest edition is no exception. After all, you can pair a boxing-glove wearing velociraptor with a living, breathing block of wood. And the goofiness doesn’t stop there. The aforementioned Fight Lab mode includes challenges that involve avoiding scud-missile-like flying clones of sumo wrestler Ganryu and defeating a giant, loincloth-wearing version of kung-fu fighter Feng Wei.

You’ll even see a few silly and not-so-subtle tributes to a certain 2D fighting series that I’ll refrain from naming. All of these lighthearted touches are quintessentially Tekken, and I’m glad to see the developers having so much fun with their work.

And who doesn’t love getting to fight in Santa’s Village?

New challengers might have trouble getting ready for their next battle
TTT 2 is for the hardcore Tekken fan. I’m talking about a person who’s debated the superiority of Japanese-style arcade sticks and scoured message boards for animation frame data to gain an edge. If you don’t have an opinion on such matters, then you might never end up playing Tekken Tag 2 at a high level because it requires that much dedication to master. 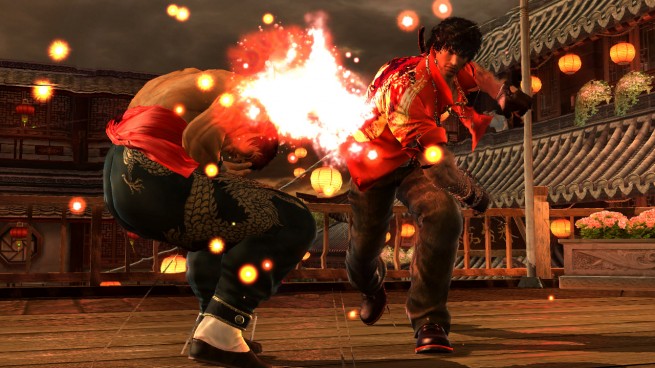 In traditional Tekken releases, you fight in a straightforward, 1-on-1 matchup. For most players, that’s hard enough. TTT 2 throws in the tagging mechanic, which adds an additional layer of complexity to the proceedings. Each fighter has specific launcher moves and bound hits that help extend combos and initiate tag-team focused salvos, which means a whole new set of timing-based maneuvers to memorize.

While most fighting-game fans love this type of depth, it leads to a somewhat steep learning curve for less experienced contenders.

You’ve probably played through most of this before
The sheer number of online and offline fighting modes — along with the brand new World Tekken Federation community-centered website — might seem intimidating at first, but after some hands-on experience, most of the options prove to be pedestrian and somewhat shallow endeavors. And many of them are familiar to fighting-game fanatics like the typical arcade and ghost battles, ranked and non-ranked online fights, time trials, and so forth.

Surprisingly enjoyable pursuits like the beat-em-up inspired Tekken Force are absent here, replaced with the less developed Fight Lab. And, unlike in previous years, you won’t find offbeat time killers like Tekken Bowling.

While Namco Bandai went out of its way to pack Tekken Tag Tournament 2 with an impressive number of characters and features, I came away from the game with a somewhat indifferent feeling. This is the Tekken I fell in love with, the Tekken that conditioned my thumbs as a teenager, and the Tekken that continues to put a smile on my face. But this is also the same Tekken I’ve played over and over again, even with the tag wrinkle taken into consideration.

Tekken doesn’t need more stuff. It needs more focus. Like the archetypical weathered warrior, the franchise needs to look within to find inspiration.

Tekken Tag Tournament 2 released on September 11, 2012, for the Xbox 360 and PlayStation 3. The publisher provided GamesBeat with a PlayStation 3 copy of the game for the purpose of this review.