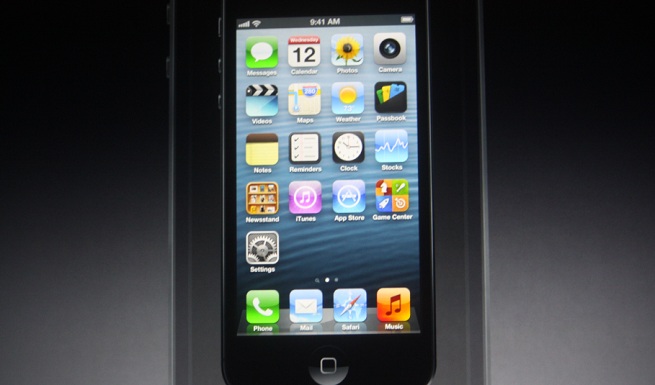 If you really think about it, we’ve been waiting for the iPhone 5 for two years now. The iPhone 4 was a radical redesign of Apple’s iconic smartphone when it debuted in 2010, and the tech rumor mill pointed to yet another landmark shift last year. Instead, we got the iPhone 4S, which sported some notable internal upgrades but still looked exactly the same as the iPhone 4.

Today Apple finally revealed the iPhone 5, and while the plethora of rumors over the past two years left little room for surprise, it looks like Apple has further refined its retro-chic iPhone 4 design to create yet another must-have smartphone.

Apple is sticking to its usual pricing for the iPhone 5, starting at $199 for the 16 GB version on contract. Preorders begin Friday, and the iPhone 5 ships September 21. More countries get their hands on the phone starting September 28, and by December, Apple says it will be available in 100 countries on over 240 carriers.

In a big upgrade over the past five generations of iPhones, the iPhone 5 features a longer 4-inch screen and LTE connectivity. I was honestly a bit shocked last year when Apple stuck to a 3.5-inch screen with the iPhone 4S, so a 4-inch screen is long overdue. But compared to today’s Android smartphones with screens bigger than 4.5-inches, the iPhone 5 still seems quaint.

The iPhone 5 is 18 percent thinner and 20 percent light than the iPhone 4S at 7.6 millimeters and 112 grams, Apple’s senior vice president of marketing said at the media unveiling today.

To reach the 4-inch screen size, Apple opted for a 16:9 aspect ratio, which makes it better suited for widescreen movies. The phone still features a Retina Display with its 326 ppi pixel density. Schiller explained that Apple chose to make the iPhone 5’s display wider since it’s better suited for one-handed use.

Apple has also added faster 802.11n Wi-Fi capabilities to the iPhone 5, in addition to LTE connectivity. The phone support 802.11n on both the 2.4Ghz and 5Ghz spectrum at speeds up to 150Mbps.

Under the hood, the iPhone 5 features a new A6 processor which Apple claims is two times faster in terms of graphics and CPU speed than the A5 processor in the iPhone 4S. “It’s a huge jump in performance, but 22 percent smaller,” Schiller said.

Despite all of the new hardware, Schiller boasts that Apple has actually surpassed the battery life of the iPhone 4S with the iPhone 5. The company claims 8 hours of 3G talk time, as well as both 3G and 4G LTE web browsing. For Wi-Fi browsing and video playback, the iPhone 5 sports 10 hours of battery life. Finally, for music the new iPhone is good for 40 hours. Apple also claims it can stay in standby for 225 hours. 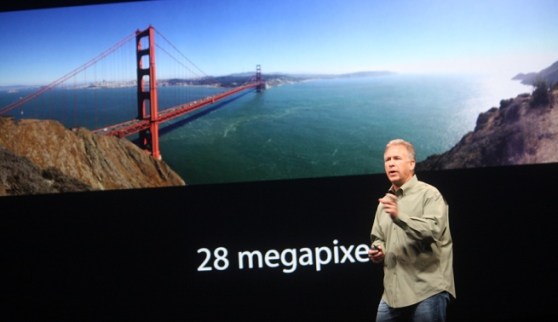 When it comes to the camera, Apple kept the 8 megapixel resolution from the iPhone 4S, but the iPhone 5 features plenty more camera technology under the hood, including a sapphire crystal lens, precision lens alignment, and a dynamic low-light mode. Thanks to the A6 processor, photo capturing is faster (40 percent better than the iPhone 4S) and clearer, Apple said. The front FaceTime camera has also been upgraded to support 720p HD video, face detection, and includes better stabilization.

You can also share iCloud Photostreams now, and Apple has finally added a panorama mode to the iPhone’s camera. Schiller showed off how the panorama feature can create a 28 megapixel photo of the Golden Gate Bridge.

Among other hardware updates, the iPhone 5 also features three microphones along the bottom, front, and back. The phone’s speaker design is 20 percent smaller than its predecessor, and it should still end up sounding better. Noise canceling is also built into the iPhone 5’s earpiece.

Something that could be particularly groundbreaking down the line is the iPhone 5’s support for wideband audio, which allows Apple to use more wireless spectrum for better audio quality. That could be particularly important for Voice-over-LTE/HD calling down the line. Schiller says Apple already has 20 partners supporting wideband audio when the phone launches.

As rumored, Apple is also debuting a new dock connector alongside the iPhone 5, dubbed “Lightning.” It’s far smaller and thinner than the 2003-era dock connector, and it’s also reversible, so you can plug it into your devices more easily. Apple says that adapters will be available to plug the Lightning connector into older accessories.

Apple’s senior vice president of iOS software Scott Forstall came on stage to remind us of some improvements coming in iOS 6, including a revamped Maps application (with driving directions), VIPs in the Mail app, and a fullscreen mode in Safari. Siri has also been improved with Facebook integration and movie listings powered by Rotten Tomatoes. Apple revealed that iOS 6 will be available for the iPhone 4S, iPhone 4, iPhone 3GS, iPad 2, and new iPad on September 19.

We’ll have some hands-on time with the iPhone 5 soon, so check back at VentureBeat later today!