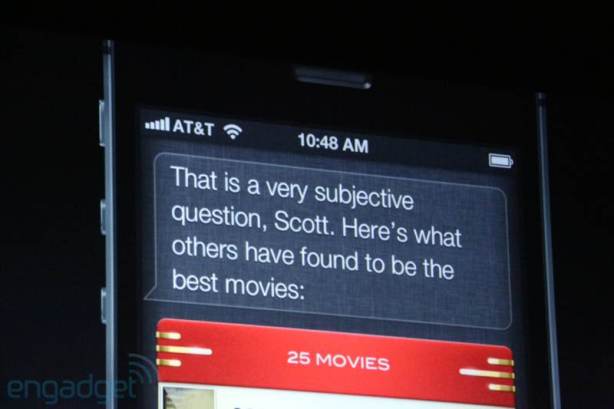 Apple is rolling out a variety of key improvements to Siri with the latest iteration of the personal assistant software.

Following up on what Apple showed at WWDC earlier this year, Siri can now do a lot more with sports. During the presentation, Apple iOS senior vice president Scott Forstall asked Siri a simple question: “How did the 49ers do?” Siri’s response was a box score of the 49er’s game against the Green Bay Packers. Sports fans should be duly enthused.

Another neat feature is that Siri can now plug directly into restaurants’ reservations systems, telling iPhone users exactly when restaurants have open tables.

Siri is getting smarter on the movie front as well. Using data from Rotten Tomatoes, the software will recommend movies to users based on what others are saying about them.

Apple is also taking a big step into the Kingdom of Zuckerberg by integrating Facebook directly into iOS 6. For Siri, this means allowing users to dictate Facebook statuses directly into their phones.