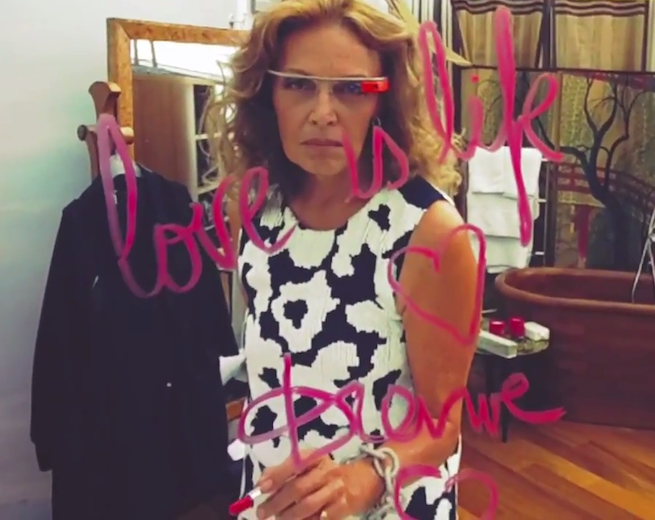 During New York Fashion Week, acclaimed designer Diane von Furstenberg added a new accessory to her show: Google’s Project Glass. Today, she released her video made entirely out of Google Glass footage, showing what it’s like to be DVF during the craziest week of fashion in the U.S.

The fashion team wore the eyewear created by Google all around DVF’s fashion show, taking video of what they were seeing. Project Glass is a wearable computer that provides information not through a screen, but rather through your “eyes.” It gives you data about your surroundings without the need to whip out your smartphone and know what to search. For example, if you go into a bookstore, Google Glass will be able to provide you with an indoor map of the place, and lead you to your desired book.

In the “movie” we see Diane writing with lipstick on a mirror and taping her father’s lucky gold coin onto her strappy sandal.  We also get some birds-eye views of New York City, indicating that someone took the prototype into a helicopter.

Project Glass is still going through testing. Furstenberg got involved with the glasses after meeting Sergey Brin at a conference, where he let her try them on. During the show Furstenberg, her stylists, and models all wore a pair and posted photos from the Glass to, what else, Google+.