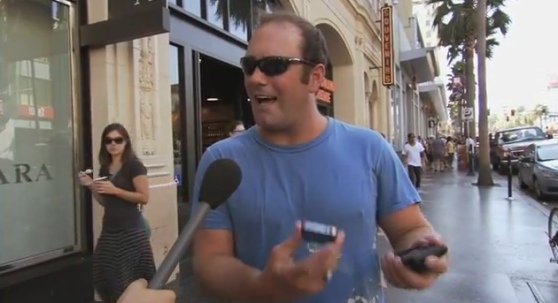 The iPhone 5 may be faster and lighter than the iPhone 4S, but can most people even tell the difference between the two?

That’s the question late-night talk show host Jimmy Kimmel posed in a meaning-soaked experiment on consumer culture. As you can see in the video below, Kimmel did man-on-the-street interviews, asking people what they thought of the “new” iPhone (which was in reality just the iPhone 4S).

Predictably given the context, few people were particularly well informed. “Oh, it’s way better,” the first man said. Another interviewee praised the “new” iPhone’s updated speed and design, even as he held the same phone in his other hand.

While we can’t ignore the likely possibility that the Kimmel show simply edited out anyone who did call them out on their trickery, the video supports a few conclusions.

One, the average person probably doesn’t spend enough time following Apple news to know the minor differences between the new iPhone and the previous one. That’s not really surprising, but it does shine an unfavorable light on the diehard Apple fans who were angered that Apple didn’t announce a more revolutionary device in place of the iPhone 5.

The second conclusion: Apple could probably repackage the iPhone 4s as the iPhone 5 and lots of people would still buy it.