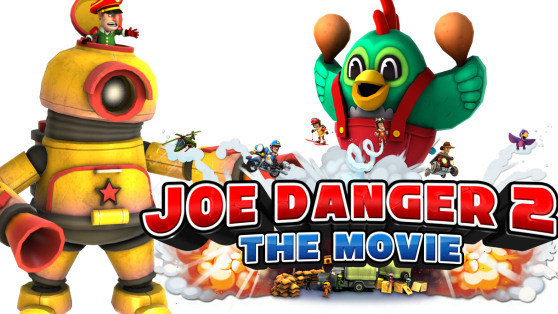 Joe Danger 2: The Movie (out for XLBA) is the last game in the series you’ll get to play — Hello Games isn’t making a trilogy. Before you ask why that’s a big deal, consider how many times companies have refused to stop milking their franchise to death and then take a moment to let it sink in. This is the final Joe Danger game, and while that has nothing to do with quality, it’s probably a good idea.

Controls that make you feel like a pro
With the first Joe Danger, which came out in 2010, I found it a little tough adapting to life as a stuntman. On paper, the controls are easy: The A button boosts, the X button is your duck and jump, the B button punches, and so on. But stuntwork can be tricky, especially when you must outrace enemies, avoid obstacles, and collect items.

Joe Danger 2 doesn’t require you to know all the best moves from the start. As the game goes on, the challenges become harder, but you start learning how to maximize the deep and varied selection of techniques at a gradual pace. Once you master a level (or “scene”), you’ll feel like the top star in Hollywood. And you’ll get even better as you catch on to more of the nuances of play and attempt more objectives in one go.

A director’s cut amount of content
A good stuntman must be hard to find because Joe Danger never takes a break. Players can push through the main five acts — or groups of scenes with a similar theme (like robbers in the city, prehistoric encounters, or robot attacks) — and then tackle the Deleted Scenes, which rival the main campaign in challenge and content. You’ll ride a number of vehicles, too — an everyday bike, a tough-to-balance unicycle, skis, a snowmobile, and more — and you’ll do it as Danger himself, a banana-hungry monkey, a donut-eating bear on a police motorcycle, a pie-obsessed clown, a chicken, and even a knight in armor. 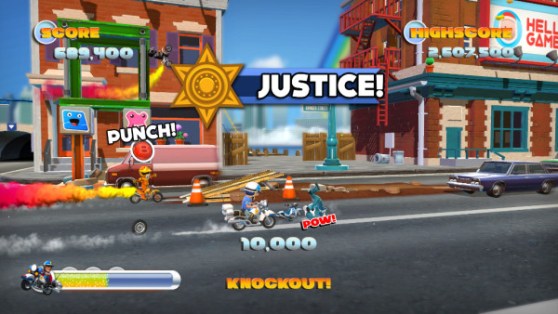 You can also build custom levels, and Joe Danger 2 introduces players to the editor and “toybox” (your access to all the game’s items) the right way: by having you alter levels as you play them, learning new tasks and using different tools as you go. Only once you finish this small and relatively simple set of scenes can you start creating daredevil tracks of your own.

And, of course, you can compete with up to three friends in multiplayer.

A-list material: puns and personality
If you like watching movies on AMC or you’ve bookmarked IMDB.com, then you’ll probably have a lot of fun with Joe Danger 2’s humor. Virtually every scene name is a pun on an existing movie title, like “Top Fun” (Top Gun) and “Doom Raider” (Tomb Raider). It’s like playing a trivia game at the same time you’re playing a video game, only you don’t lose points for failing to recognize pop culture obscurities.

The movie theme works well for Joe Danger 2. The allusions to popular movies like Indiana Jones means you’ll be in the middle of some crazy action scenes that are a lot of fun to play, such as a mine-cart ride downhill with boulders rolling close behind and even a helicopter shoot-out. Plus, each time you lose and restart a level, that’s a “take.” On the harder trials, you’ll start hitting take No. 40 or No. 50, and you can hear the exhaustion in the director/announcer’s voice.

It’s also enjoyable to listen to the director shout orders rapid fire — to duck or jump to circumvent traps, for example — only for you to get confused and do exactly the opposite. It’s a little extra layer of entertainment that adds up to something blockbuster big. 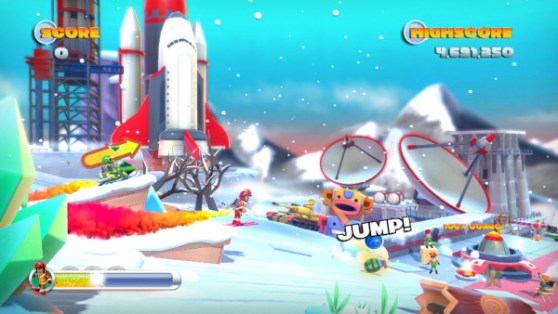 The Hangover syndrome
Joe Danger 2 is solid fun — you might even laugh out loud at how ridiculous the action and your deaths can be — but it’s kind of like the movie The Hangover 2: A lot of the same. The game is highly comparable to the first Joe Danger, and while that’s not a bad thing (same fun, but a better transition into gameplay, as mentioned above), it does mean that only people who loved the original need bother with the sequel. Or, if you don’t own either, you might as well take your pick.

Limited multiplayer
I remember the previous game featuring some really awesome multiplayer, but this mode in Joe Danger 2 is surprisingly deficient. Even after hours of playtime, I could try only five measly courses, and they were extremely dull. This oversight detracts a lot of replay value from the game.

However, Sean Murray, the managing director of Hello Games, did provide us with a few answers about this curiosity, so players have hope for improvement. “Right now, you can’t create your own multiplayer levels,” he told GamesBeat, “but Hello Games can and will be publishing their own in the coming weeks in the level-sharing area. Right now, we only have five multiplayer levels, each with a different vehicle — jetpack, mine cart, skis, motorbike, and unicycle. However, we have over 20 vehicles in total, and we intend all of them to get their own multiplayer event in the coming weeks and months.

“Every Friday, the Hello Games team will highlight five new levels from the community called Developer Picks. Of those five, at least one will be created by us and will often introduce some new modes, such as new multiplayer levels.”

Recaps that sound like a bad trailer
As hilarious as Joe Danger 2 is, the recaps, essentially “minimovies” between acts that show highlights from the scenes you’ve just played, are more annoying than entertaining. The announcer sounds like he ran out of things to say about the game, and it’s particularly noticeable the more you progress. He resorts to saying “Robots!” a bunch of different ways over and over again. 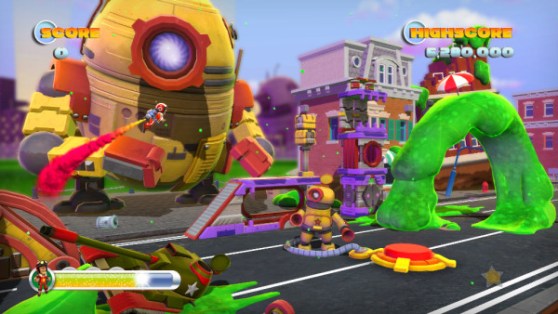 Joe Danger 2: The Movie is a good game, but even with the Hollywood theme, it doesn’t innovate enough on what Hello Games did two years ago. It’s a blast to play through either way (how could giant dinosaurs and snowy avalanches not make for an insane ride?), but the small differences don’t justify an extra purchase if you already own the first Joe Danger — unless you just can’t get enough of that lovable stuntman.

Joe Danger 2: The Movie was released for the Xbox 360 on Friday. The publisher provided GamesBeat with a download code of the game for the purpose of this review.