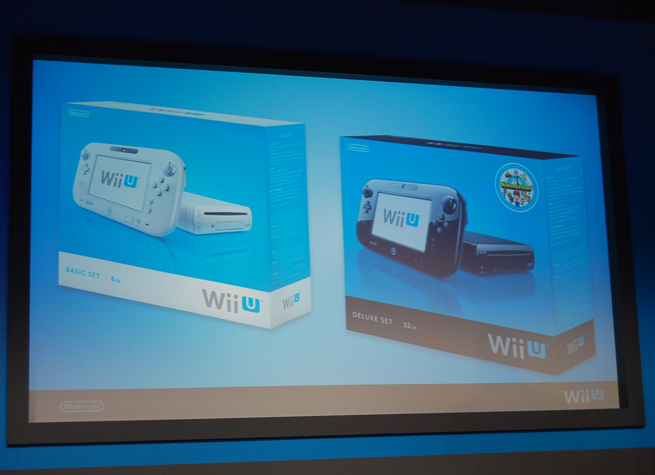 NEW YORK CITY — Nintendo has finally given hard details on its upcoming Wii U game console, with a U.S. launch date of Nov. 18 and a base price of $300.

As we learned late last night from its Japanese launch event, the Wii U comes in two editions — a “basic” white version with 8GB of storage and a “deluxe” black version with 32GB of storage. The basic version costs $300, and the deluxe version runs $350.

It has 1GB RAM for “game memory” and 1GB RAM for “system memory.” Wii U owners who own games for the Wii’s  WiiWare and Virtual Console services may transfer those games to the new system.

Onstage at the launch event, Nintendo of America president Reggie Fils-Aime did not reveal which games would be available at launch. He did say that “50 games” would be available in the “launch window” between November 2012 and March 2013.

Unlike the Wii’s motion-sensing gameplay, a touchscreen tablet controller drives Wii U games. With some, you can play on your TV and transfer the picture to the tablet screen. Other games use the touchscreen as primary input method while you look at your TV screen. Still, others provide a unique multiplayer experience with one person using the tablet controller and others using Wii Remotes.

The Wii U debuted to mixed reactions at 2011’s E3 gaming conference. Those reactions have remained decidedly mixed throughout this year as Nintendo readies for its big launch. An executive from Electronic Arts even recently told us that Wii U was not in his “top five priorities.”

While the Wii U has easily noticeable foes in the Xbox 360 and the PlayStation 3, it also faces stiff competition in the casual gaming department from tablets, smartphones, and social networks. Future consoles could be challenging to compete with as well. The Wii U appears to have the power of a 360 or PS3, but that almost certainly won’t stand up in the next-gen console offerings from Microsoft and Sony.

The Wii U will have a tough time living up to its predecessor, as Nintendo has sold 96 million Wiis to date.

Let us know in the comments if you plan to buy a Wii U.