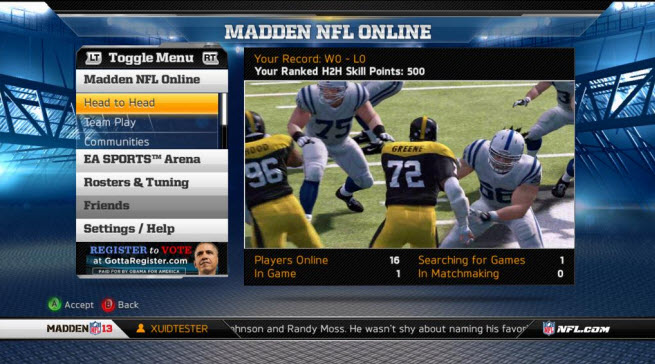 President Barack Obama’s reelection campaign is taking out ads in Electronic Arts’ online games as part of an effort to reach a critical voting demographic. The move shows the influence that video games can have, beyond making your palms sweaty.

In-game advertisements were an experiment in the 2008 election. For 2012 the campaign is running ads, like the one pictured in the lower left corner of EA’s connected console version of the Madden NFL football game, in key battleground states. The ads are running in Madden NFL 13, on Pogo.com, and in mobile games including Battleship, Tetris and Scrabble. The ads are targeting in the battleground states of Ohio, Nevada, Colorado, Iowa, New Hampshire, and Virginia.

Clearly, the campaign sees young male gamers as well as young female gamers as key voters in this election. The ads are running from now until the November election to increase early voting awareness and to reach a critical gaming demographic.

Here’s a gallery of the ads.