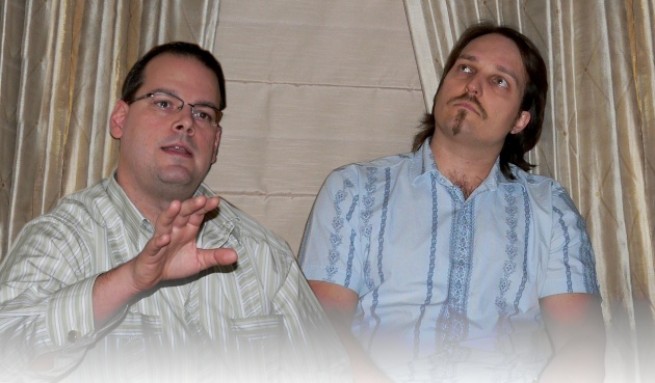 The doctors are done at BioWare.

According to a blog on the official BioWare website, Ray Muzyka and Greg Zeschuk are retiring from the development company that produced some of the most beloved video games of the last two decades: Mass Effect, Star Wars: Knights of the Old Republic, and Dragon Age.

“After nearly two decades in video games, I’ve decided to move on to pursue an entirely different set of challenges,” Muzyka wrote in a personal blog. “This has been an incredibly difficult decision to make; after thinking about it for many months, I made the decision to retire from video games back in early April 2012 — at that time I provided six month’s notice to EA, to help enable a solid transition for my teams at BioWare.”

Zeschuk separately wrote in his blog: “After nearly 20 years working at BioWare, I’ve decided it’s time to move on and pursue something new. This decision isn’t without significant pain and regret, but it’s also something I know I need to do, for myself and my family.

“I’ve reached in unexpected point in my life where I no longer have the passion that I once did for the company, for the games, and for the challenge of creation.”

So what’s next for the BioWare cofounders? It doesn’t seem like either is eager to start something new in the game industry.

Zeschuk wants to spend a lot of time with his family and his friends, although he did say he would pursue his current passion project: homebrew beer. His initial project is a web-based interview program where he interviews notable brewers about their beers. It will be called The Beer Diaries.

“If things go well, I’ll work on other beer-related shows, apps, and projects,” Zeschuck wrote. “If not, I’ll have drunk a lot of tasty beers and may be back in games or even something else completely different. Ultimately, time will tell.”

Muzyka plans to follow his conviction for free enterprise into a different industry: impact investment and social entrepreneurship. This is an ethical take on investing in social issues in a way that also benefits typical business profit goals.

“To that end, I’ll also be spending time getting involved with more charities in education, health care, and animal rights, areas where my wife and I’ve typically focused our charitable donation in the past,” Muzyka wrote.

The two medical doctors founded BioWare in February of 1995. In 1998 the company put itself on the map with the PC role-playing game Baldur’s Gate. It followed that up Baldur’s Gate II in 2000, a game some consider among the best RPGs ever made, and Neverwinter Nights in 2002. BioWare took its first steps into a larger world with its sci-fi RPG, Star Wars: Knights of the Old Republic, in 2003.

In 2007, BioWare released the third-person shooter and RPG Mass Effect for the PC and Xbox 360. That same year, publisher Electronic Arts purchased BioWare.

Since then, the studio released two sequels to Mass Effect. It also started a new fantasy-RPG series, Dragon Age. BioWare just announced that it is working on Dragon Age III: Inquisition.

In 2011, the developer released Star Wars: The Old Republic, its first massively multiplayer online role-playing game. It is a followup to the beloved Knights of the Old Republic games, but it reportedly suffered from a difficult development cycle and a massive budget. After months of losing subscribers, EA and BioWare announced The Old Republic will become free-to-play.

Fans, as they are wont to do, have voiced concerns over the influence that EA has had over BioWare. This lastest development is unlikely to renew anyone’s confidence in the relationship.