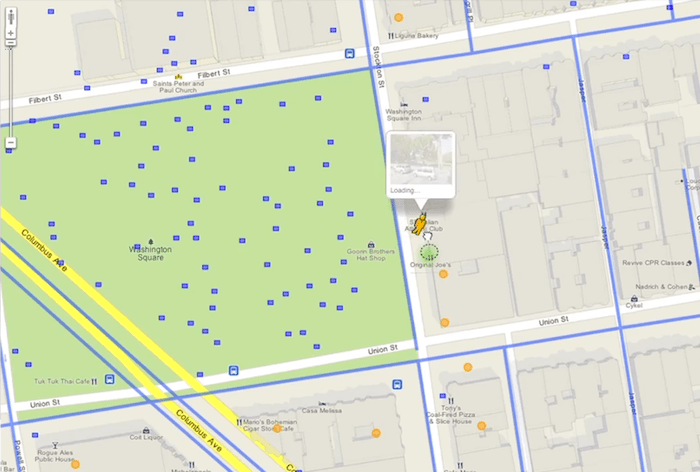 Checking out the interior of a business on Google Maps just got a bit easier. The company now has markers on its maps that show you where and how you can virtually get inside your favorite shops.

Last October we reported that you can use Google Maps to travel beyond the front doors of a store and into the actual establishment. Participating businesses invited Google’s photographers to come in and do a photo shoot of their location. The photo is a panoramic view of the business interior, and in good Google fashion, all faces are blurred out in the final product.

In order to actually see the inside of a business was a little trickier, however. It was hard to tell if a business supported the panoramic view, so you didn’t know which ones to click on. But now, Google has made it easier to spot available places by putting an orange dot on the map indicating that a panoramic business interior lives here. You can pull the “pegman,” or the little orange guy you use to get to Google’s Street View, and place him on the orange peg. The panoramic image then appears.

For the most part, these panoramic images are just a perk of using Google Maps, but they can serve a function if you’d like to know what a place, such as a restaurant, looks like before you visit.

When the feature first debuted, some brought up the point that it could be an easy way for criminals to get a good look at the place, too — that is, casing the joint. That said, if someone wants to rob you, they’re probably going to check out the place one way or another, so having it available on Google Maps probably won’t make that big of a difference.